"Swords of Light", known as "Pursuit of Light!!" in the Japanese version, is the eighty-third chapter of the Yu-Gi-Oh! manga. In its first English printing, it was numbered as the twenty-fourth chapter of Yu-Gi-Oh! Duelist. In the 3-in-1 edition, its number was changed to match the original Japanese printing.

Dark Yugi and the Player Killer of Darkness conclude their Duel. 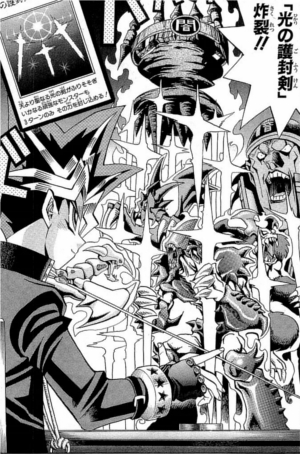 "Swords of Revealing Light" stops the Player Killer of Darkness' monsters from attacking.

Dark Yugi has just played "Swords of Revealing Light", preventing the Player Killer of Darkness' monsters from attacking and also removing the darkness, allowing him to see the monsters. Dark Yugi said that the Player Killer no longer had anywhere to hide and asked if he was ready as his life ended in two turns.

The Player Killer worries that Dark Yugi will attack his exposed monsters, but compares Yugi's one monster "Curse of Dragon" to his three, "Barox", "King of Yamimakai" and "Dark Chimera", which despite being trapped by the swords were still powerful. He thinks Dark Yugi's prediction of him losing in two turns was ridiculous. Regardless he opts not to let his guard down. In preparation for the chance that Dark Yugi might Summon a more powerful monster, he activates the card he just drew, "Yellow Luster Shield", creating a defensive barrier around monsters. He got it to surround "Castle of Dark Illusions" and subsequently all his monsters underneath it, raising their DEF by 600. The DEF of "Castle of Dark Illusions", "Dark Chimera", "King of Yamimaki" and "Barox" rose to 3100, 2500, 2900 and 2800 respectively. He laughed and asked if Dark Yugi still believed he could win in two turns.

Dark Yugi Summons "Gaia the Fierce Knight" and activates the face-down card he played earlier, "Polymerization". He fuses "Gaia" with "Curse of Dragon", creating "Gaia the Dragon Champion". He then ends his turn, vowing that "Gaia" will defeat the Player Killer on his next turn.

Since "Gaia the Dragon Champion" has only 2600 ATK, the Player Killer suspects that Dark Yugi is bluffing as it is not strong enough to defeat his defensive monsters. However, he still finds it unsettling that Dark Yugi is smiling. He thinks that he just needs to survive Dark Yugi's next attack, then "Swords of Revealing Light" will disappear, allowing his monsters to attack for the win. Still cautious, he decides to strengthen his defense even further, so he Summons "Metal Guardian" in Defense Mode outside the shield. It has 2800 DEF and he now believes his monsters to be untouchable. Dark Yugi calls him pathetic for only worrying about being safe from attack. The Player Killer angrily calls him a fool and says that after he lives through Dark Yugi's next attack, he will attack him with everything. However Dark Yugi says that it is too late; he is already caught in his trap. He explains that security can be a trap and the more the Player Killer has protected himself, the more he has cut off escape.

Dark Yugi begins his turn, which he says will be the last turn. He Summons "Catapult Turtle" and mounts "Gaia the Dragon Champion" on its catapult to be fired towards a target. He says that the speed of the catapult will increase the ATK of "Gaia", meaning this will be a mighty blow. The Player Killer of Darkness claims that it is no use; his monsters are protected by "Yellow Luster Shield" and "Metal Guardian" and that "Metal Guardian" should be enough to stop the catapult. However Dark Yugi points out that he did not say he was firing at those monsters and his true target is the castle. With 3100 DEF, the Player Killer thinks it is impossible for anything to break through it. 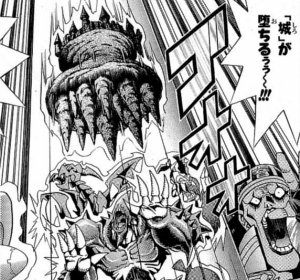 "Castle of Dark Illusions" falls on the Player Killer's monsters.

As "Gaia the Dragon Champion is fired, its ATK becomes 3100. "Gaia" hits "Castle of Dark Illusions" directly, but is killed in the process, causing Dark Yugi to lose Life Points equal to half his ATK, dropping him to 300. The flotation ring around the castle is shattered, while the castle itself remains unharmed. 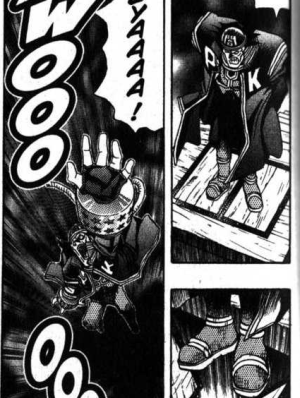 The Player Killer is hanged.

The following cards appeared in this chapter. Cards that debuted here are in italics.