"The God of the Obelisk", known as "The Card as Fierce as God" is the 148th chapter of the Yu-Gi-Oh! manga. In its first English printing, it was numbered as the 98th chapter of Yu-Gi-Oh! Duelist. In the 3-in-1 edition, its number was changed to match the original Japanese printing.

Seto Kaiba tests his new model Duel Disk and Egyptian God Card, "The God of the Obelisk", against a Duel Machine.

The illustration that was used for the illegal "Obelisk the Tormentor" card is shown in a panel of this chapter.

At the Collectible Card Games division of the KaibaCorp Research & Development, Kaiba stands in an arena across from a robotic Duel Machine. Mokuba and a number of KaibaCorp employees, including Chief Kuwabara, observe from the control room. 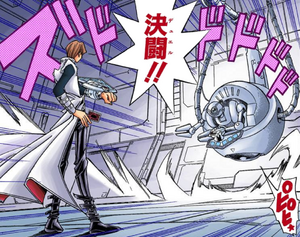 Kaiba puts on his new model of Duel Disk, ready to test it. Unlike the last model, this one doesn't need to be thrown. Once the card is placed in the arm plate, its data is scanned and a Solid Vision hologram is created. He thinks to himself that Yugi is the only Duelist he recognizes as a rival, only he and Yugi have true pride and when the new Duel Disk is perfected, a new battle for them will begin. He does not care if it is Yugi who is on the tablet that he saw at the museum; he is only interested in the enemy in front of him. Even if Yugi is the embodiment of the Pharaoh, who seeking the honor of the past, Kaiba announces that he shall take the glory of the future.

Kuwabara sets the Duel Machine's tactics to max. He says that he's unsure if Kaiba can beat the computer. Mokuba yells at him for his statement, but Kuwabara informs him that the computer is using Kaiba's own Deck that he used during Duelist Kingdom. Upon hearing this even Mokuba becomes a bit anxious, realizing his brother is up against his ultimate Deck.

Kaiba adds his new Deck to his Duel Disk, recalling that the card Ishizu gave him is in it. This Duel shall not just a test of the new model Duel Disk, he thinks, but it is also a test of "The God of the Obelisk". He wonders how it will fare against the Deck containing three "Blue-Eyes White Dragons" that he spent so many years perfecting. He shouts over to the control room to get started, and Kuwabara switches on the Auto Duel system and the Duel Machine.

The holograms of Kaiba's hand appear before him.

Solid Vision holograms of the cards in each player's hand appear in front of each Duelist, with their backs facing their opponents. The Duel Machine begins its turn and Summons a monster in Attack Mode. Kaiba yells at it to bring it on. The monster is "Blue-Eyes White Dragon", whose hologram appears in font of the machine. Mokuba is worried that it's managed to bring out a "Blue-Eyes White Dragon" on the first turn and shouts at Kaiba to watch out.

The Duel Machine assess the threat and begins its turn. Kaiba sees that the computer isn't attacking because it is cautious of his face-down card. Although it is artificial intelligence, Kaiba believes its tactics are as good as anyone he has ever faced. The computer Summons "Lord of D.". With it on the field, all Dragons are immune to magic. Kaiba notes that if the computer had attacked, "Blue-Eyes White Dragon" would have been put to sleep by the effect of "Invitation to a Dark Sleep", but the computer saw through that. 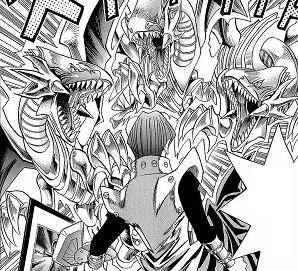 On Kaiba's turn, he plays "Steel Ogre Grotto #2" in Defense Mode. As he ends his turn, "Monster Reborn" is visible in his hand. Mokuba starts to worry that the computer has Kaiba on defense and says that he knew Kaiba's Deck wasn't strong enough.

The computer starts its turn and plays "The Flute of Summoning Dragon", Special Summoning two more "Blue-Eyes White Dragons". Kaiba faces the three dragons, thinking that three of them at the same time is the deadliest possible attack. Kuwabara says that Kaiba has had his own combo turned against him and asks if he can defeat three "Blue-Eyes". One of the other employees says that no one can. Kaiba remembers when Yugi faced his three "Blue-Eyes", back in Death-T. He stood up to them without fear, believed in his cards, took the challenge with courage and won. A Duelist's greatest enemy is a monster in their hearts called fear, Kaiba thinks.

The computer prepares to attack and Kaiba vows to seize the future. The dragons begin their "Burst Stream of Destruction" attack, but Kaiba plays "Negate Attack" cancelling their attacks. 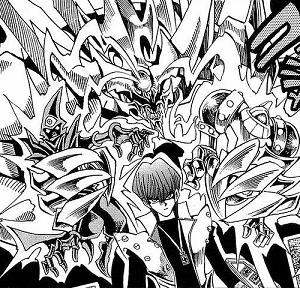 Kaiba sacrifices "Invitation to a Dark Sleep" and "Steel Ogre Grotto #2" for the effect of "Obelisk".

Kaiba begins his turn and bets everything on his next card. He draws "The God of the Obelisk", which he immediately Summons. The Egyptian God monster, a blue-skinned winged giant, fills the entire room with its massive bulk, and Mokuba recognizes it as the rare card Kaiba was talking about. During Kaiba's Battle Phase, he Sacrifices two of his monsters and "Obelisk" absorbs their souls. Kuwabara is astonished to see "Obelisk" kill its allies and wonders if that is the cost of power. The other employee points out that "Obelisk's" Attack Value is rising rapidly.

Kaiba orders "Obelisk" to attack. It uses its "Fist of the Obelisk" to destroy the three "Blue-Eyes White Dragons". The Duel Machine explodes, unable to compute the power of "Obelisk", while the panels and computers in the control room start to explode as well. Mokuba celebrates "Obelisk" taking out both the monsters and the computer's Life Points.

Two legendary cards remain, Kaiba thinks and no matter what enemy stands in his way, he will find those cards and make them his. Once that day comes, he shall be the King of Duelists.

Turn 6: Seto Kaiba
Kaiba draws "The God of the Obelisk" and Summons it. He sacrifices his two other monsters to activate the effect of "Obelisk". Its ATK rises to infinity and it attacks, destroying the 3 "Blue-Eyes White Dragons." (Duel Machine: 0) (This effect was not fully clarified until later.)