"The Thief", known as "Thief!!?" in the Japanese version, is the seventy-third chapter of the Yu-Gi-Oh! manga. In its first English printing, it was numbered as the fourteenth chapter of Yu-Gi-Oh! Duelist. In the 3-in-1 edition, its number was changed to match the original Japanese printing.

Dark Yugi, Jonouchi and their friends search for a thief, who stole another Duelist's Star Chips.

Dark Yugi, Jonouchi, Anzu, Honda and Bakura leave the cliffs after the Duel between Dark Yugi and Kajiki. Kajiki waves to them as they leave. Jonouchi thinks that there's something about Kajiki that you just can't hate, while Anzu guesses that the Duelists on the island must all have their own hopes and dreams. 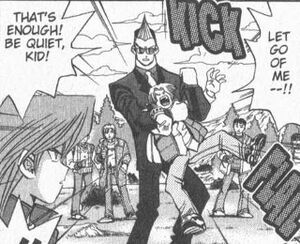 With Jonouchi on two Star Chips and Dark Yugi on five, they continue to search for more opponents. Five hours into the tournament, they see a boy being restrained by Saruwatari over, while a number of other Duelists stare in surprise. Saruwatari says that he can see the boy has lost all his Star Chips, so he has to leave the island. He argues that his Star Chips along with his cards were stolen, but Saruwatari isn't interested in how he lost them and states the rules are that you must leave the kingdom if you run out of Star Chips. Dark Yugi deduces that Saruwatari must work for Pegasus.

Jonouchi tries telling Saruwatari to let the boy go and says that having Star Chips stolen is not the same as losing a Duel. Saruwatari replies that other participants are forbidden to interfere and doing so will result in their disqualification. Jonouchi asks the boy what the thief looked like and offers to find him. The boy explains that he couldn't see the thief's face because he wore a bandanna and that he had been challenged to a Duel, but the moment he put his Deck and Star Chips down, the thief grabbed them and ran. Jonouchi asks which way he ran and the boy points to his left. Vowing to catch the thief, Jonouchi asks that Saruwatari not evict the boy until then. Saruwatari just says that he will think about it.

Jonouchi declares that Star Chips are a Duelist's life and that he won't forgive anyone for killing people or stealing their Star Chips. He then turns to the boy and informs him that if he does catch the thief he will taking half the Star Chips as payment. Honda sighs that Jonouchi is a terrible altruist and the group head off in search of the thief. Meanwhile someone stares at them from the bushes.

Meanwhile Saruwatari takes out his walkie-talkie and contacts Pegasus, informing him that he located a certain kid in block D and requests that all personnel be sent there. He says that they will capture him and bring him back to the castle. He wonders where the thief went and then takes the boy, whose Star Chips were stolen, by the neck and announces that he is leaving the island because he has no Star Chips.

Pegasus considers himself to be blessed among men.

At the castle, Pegasus is sitting in a dining area, while Croquet stands behind him. Portraits of Shadi and a young woman are hung from the wall. Pegasus considers himself to be blessed among men as he sips on fine wine, eats well aged gorgonzola cheese and laughs at the American comic Funny Rabbit, which he considers to be the best comic in the world. Within the comic, Funny Rabbit tries to escape being eaten by a crocodile.

Pegasus asks Croquet about the status of the Duels. He is informed that after six hours of dueling twelve of the forty participants have been eliminated and the first ship of evacuees will be leaving soon. Pegasus inquires about Yugi's status and is told that he is still in the running with five Star Chips. Pegasus is delighted and says that Yugi must make it to the finals.

Finally he asks if they have managed to located a certain boy yet. Croquet replies that they haven't managed to yet. Pegasus thinks it is a shame that he ran away after being invited to the castle as a private guest and comments that he must not have liked the reception. Croquet apologizes, but Pegasus insists that there is no need to worry as he has a good idea of what's on the boys mind. He advises Croquet to keep his eyes on Yugi as that is where the boy is heading and when they capture him, they are to lock him up in the dungeon this time. He then goes back to reading Funny Rabbit to spend his time until the Duel.

Dark Yugi, Jonouchi, Anzu, Honda and Bakura continue to search the island for the thief to no avail. Anzu suggests that they give up, but Jonouchi doesn't want to as has his eyes set on the Star Chips reward. Honda thinks to himself that Jonouchi isn't very good at this "Way of the Duelist" thing. 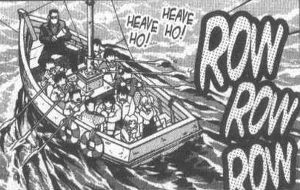 The boat taking people off the island.

Dark Yugi notices a boat of Duelists leaving the island. The boat is captained by one of Pegasus' suits. Among the evacuees are Insector Haga and the boy who had his Star Chips stolen. Haga demands that the others give them space, reminding them that he is the champion of Japan. The other boy looks at Haga and wished his Star Chips had not been stolen. 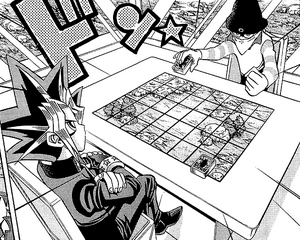 Dark Yugi and the thief's Duel.

A boy wearing a bandanna jumps out of the bushes and calls Dark Yugi. Seeing the bandanna, Jonouchi assumes that this must be the thief. Dark Yugi asks the boy if he wants the Duel him. The boy nods, so they make their way to a nearby Battle Box to commence. As the two sit down, Jonouchi admits he is surprised that Dark Yugi accepted the Duel just like that. Dark Yugi asks how many Star Chips they are betting and the boy holds up five fingers. Dark Yugi removes his chips from his Duel Glove, while the boy roots his out of his pocket. The lack of a Duel Glove tells Dark Yugi that this boy must be the thief and that he wasn't one of the Duelists chosen be Pegasus to come to the island. He wonders if the boy stole the Star Chips just to challenge him and wonders why he would go so far. He then gets a hunch about something. Jonouchi is certain that Dark Yugi knows that the boy is the thief. Honda wonders why he accepted the Duel in that case. And Anzu wonders if it means Dark Yugi knows who the boy is. 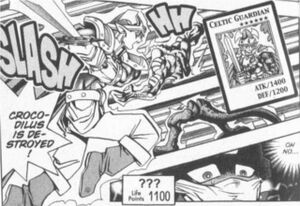 The thief sees that he has little chance of winning.

The thief Summons "Man-Eating Plant", which has 800 ATK, but Dark Yugi counters with "Winged Dragon, Guardian of the Fortress", which has 1400 ATK. The dragon attacks from the sky and defeats the plant, dropping the thief's Life Points to 1400. The thief gulps and proceeds to Summon "Crocodilus", which has 1100 ATK. This time Dark Yugi counters with "Celtic Guardian", which has 1400 ATK. It cuts "Crocodilus" in half, destroying it and dropping the thief's Life Points to 1100. The thief sees that he's in real danger of losing.

Jonouchi thinks that the thief is not very good and Anzu agrees that he is no match for Dark Yugi. Dark Yugi advises the thief to give up, as the game is not so simple that it can be won with stolen cards. The thief makes a grab for the Star Chips, but Dark Yugi catches him by the wrist, before he can run. Dark Yugi notices something about the thief and says that he knew it. He removes the thief's hat and bandanna, revealing that he is Mokuba Kaiba.

At this point, the thief tries to steal Dark Yugi's Star Chips and escape, but Dark Yugi is able to prevent him from doing so and reveals him as Mokuba Kaiba.

The following cards appear in this chapter. Cards in italics debuted here.

The start of the eighth episode of the Yu-Gi-Oh! anime, "Everything's Relative", is based on this chapter. There are a number of differences including: