"The Cards with Teeth (Part 1)" is the ninth chapter of the Yu-Gi-Oh! manga. This is the first time Duel Monsters appeared in any Yu-Gi-Oh! medium. This chapter contains the first storyline to extend over more than one chapter.

Seto Kaiba finds Sugoroku Mutou has a "Blue-Eyes White Dragon". After Sugoroku refuses to trade for the card, Kaiba resorts to dishonest means to get it.

At the Kame Game, Sugoroku introduces Yugi's friends, Jonouchi and Anzu to Duel Monsters, a card game, which is currently popular in America. Unlike standard playing cards, Duel Monsters have a wide variety of card illustrations and contains thousands of different Monster and Spell Cards.

Anzu is impressed by some nice artwork, while she finds some of the others kinda gross. Jonouchi asks how to play and if it is anything like Menko. (In the English version, he asks if it is like gambling). Yugi explains that it is a trading card game, involving two players, who each stake a card and the winner takes both cards. The game allows both players to be wizards, who can use their cards to cast spells or Summon monsters to fight. All have different Attack and Defense strengths. The first player to run out of Life Points loses.

As Yugi explains this an image of "Mystic Lamp" is shown in the background, with labels showing its name, Level, illustration, Attack (ATK) and Defense (DEF) and mentioning that there's a prismatic corner stamp.

Sugoroku says that there are both strong and weak cards, but with so many, one could never collect them all. He's heard of a fan in America, who sold his house just to buy 1 card. Sugoroku himself is fan enough to have 1 amazing card. He decides to show it to them, stating that it is his greatest treasure. He holds up the card, "Blue-Eyes White Dragon". (In the English version, "Blue-Eyes White Dragon's" Type and lore are added.) He tells them that the "Blue-Eyes White Dragon" is so overpowered they stopped production, making it very valuable. In the Japanese version, he says that some people have been killed over it. In the English version, he says collectors would pay through their nose to get their hands on one.

Jonouchi suggests that they play Duel Monsters at school tomorrow and Yugi gladly agrees. Jonouchi asks for a pack with plenty of strong ones, but Sugoroku laughs that you can't tell that until you open the pack. 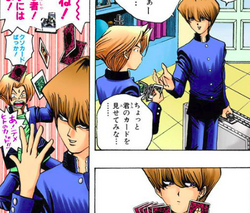 Seto Kaiba enters the shop and sees they're talking about Duel Monsters. Yugi recognizes Kaiba from their class. Jonouchi is glad to hear that Kaiba plays too and invites him to join them playing at school tomorrow. Kaiba laughs that Jonouchi isn't in his league and takes a look at his cards. He tosses them back at Jonouchi saying that they're useless and a beginner like Jonouchi could never match him. Kaiba boasts that he's good enough to compete at the national competition and since Jonouchi could never win against his Deck, playing against him would be pointless. He tells Jonouchi to come back, after he's collected at least 10,000 cards.

Jonouchi starts to get mad and thinks to himself that he wouldn't lose in a real fight. Yugi tries to calm him down, saying he'll still play with Jonouchi.

Kaiba turns to Sugoroku and asks if he has any good cards he might be persuaded to buy. Sugoroku says that he has and Kaiba notices the "Blue-Eyes White Dragon" on the counter. His hard beats and he starts to sweat, recognizing it as a legendary card. Sugoroku swipes the card back off he counter and Kaiba starts to question him, asking where he got the card, what it's doing here and demanding to have a look. Sugoroku agrees to let him have one look and hands him the card. Kaiba starts to stare at it in awe. He's never seen the card or ever thought that he'd actually hold one. The card is powerful and rare, he thinks, if he was to own it, he'd be invincible. Sugoroku explains that he got the "Blue-Eyes White Dragon" from a dear friend.

Sugoroku swipes the card back off of him, saying that's enough. Kaiba drops open a briefcase full of cards on the counter, offering to trade all of them for the "Blue-Eyes White Dragon". Yugi, Anzu and Jonouchi are surprised by both Kaiba offering that many cards and Sugoroku turning them down. It makes sense to Kaiba, he wouldn't trade the card for anything himself.

Sugoroku says that he knows why Kaiba wants the card so much, however he has a good reason to hang onto it and it's not just because it's a strong card. An important gamer friend of his from America gave him the card. The card is as important to him as that friend, so he could never give it up. The same would be true if it was a common card. A picture of Sugoroku with the friend is visible behind him as he speaks to Kaiba. If you really treasure something, it grows a heart of its own and you would never trade anything for that heart, he explains and tells Kaiba to take care of every card in his briefcase and then he will find the true strength of this game. Kaiba slams his briefcase shut and walks out, saying he will get it later then.

Jonouchi compliments Sugoroku on his speech and Yugi says that even without a rare card, his grandfather has never lost a game.

Yugi faces against Jonouchi in a game of Duel Monsters, while a large group of students, including Anzu, Honda, Hanasaki gather around them. Jonouchi attacks Yugi with "Zombie" and Yugi defends with another card.

As they play, some of the basic rules of Duel Monsters are shown to the reader. They say that each player uses a Deck of 40 cards and starts with 2000 Life Points. They take turns drawing cards and play them in either Attack and Defense Mode. When the defending player can't play a monster, the opponent's monsters Attack Points are deducted from their Life Points. When a player's Life Points reach 0, they lose. The Japanese version also includes the rules for calculating damage and determining which monsters are destroyed during battles. 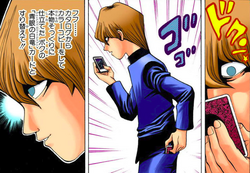 Kaiba switches the "Blue-Eyes White Dragon" for a counterfeit.

Yugi starts his turn and Summons "Blackland Fire Dragon". He uses it to attack and destroy "Zombie", dropping Jonouchi's Life Points from 2000 to 1500. Jonouchi starts to panic and says he'll use his secret weapon, but Yugi beats it too. After he loses, the other students laugh and Jonouchi and his secret weapon for being weak. Kaiba laughs to himself that that was such a low level Duel and even the elementary school students at the nationals are better than them.

Kaiba addresses Yugi and tells him the Duel was fun to watch and asks if Yugi has the "Blue-Eyes White Dragon" in his schoolbag. Yugi is impressed and asks how Kaiba knew it was there. He says he begged his grandfather to lend it to him for one day, but had to promise not to play with it. Kaiba asks to be shown it one more time. Since he saw the card yesterday, he hasn't been able to sleep, he's been so excited, he tells Yugi and says that what his grandfather told him yesterday has taught him what it means to love the cards. Yugi agrees and to show it to him and hands Kaiba the card.

Kaiba admires the card and quickly swaps it with a counterfeit he made. He hands back the counterfeit, thanking Yugi and saying that holding the card makes him love the game more. Kaiba tells them to have fun with their game and leaves. Yugi looks at him suspiciously, until Jonouchi calls him for a rematch. Kaiba hits Yugi, with his briefcase.

Kaiba leaves school, laughing that there's no way he'll lose the next tournament, but hears Yugi call after him. He worries slightly and asks Yugi if he's on his way home. Yugi asks Kaiba to give back the card. He didn't want to ask him earlier because everyone was watching, he explains. Kaiba acts innocent, asking if Yugi thinks he stole the card, and points out that he gave it back to him. Yugi says that he can tell the difference between a real and a fake and asks again for the card back. He tells Kaiba that the card is important to his grandfather and if he doesn't keep his promise and give him back the card, it'll break his heart. Kaiba still claims to have not taken it and asks Yugi about his own feelings; why doesn't he believe his friend before complaining about his grandfather? Yugi objects, causing Kaiba to lose his patience and hit him over the head with his briefcase.

Kaiba states that he doesn't care about loving cards and stupid things like that and asks Yugi to tell his grandfather that it's not how you play the game, it's whether you win or lose.

Yugi changes to Dark Yugi, who says he must teach Kaiba a lesson with a Shadow Game and when he's done, he'll take back his grandfather's card.

Dark Yugi and Kaiba sit down at a table to play Duel Monsters. Kaiba can't believe that Yugi challenged him to a game.

Dark Yugi explains that the rules of this Duel Monsters game will be slightly different than what Kaiba's used to. Sounds like fun to Kaiba, but he doesn't think his cards will lose, no matter what house rules Dark Yugi has. Kaiba then thinks to himself, that if he ends-up in a pinch, he can use the stolen "Blue-Eyes White Dragon" and just tell Dark Yugi that he got it someplace else.

Kaiba goes first and draws a Level 5 monster "Ryu-Kishin". As Kaiba Summons the card, a real monster emerges from it. Dark Yugi smiles, reminding Kaiba that he said the game would be different.

Jonouchi Normal Summons "Zombie" with 1000 ATK. Yugi plays a card in Defense Position to defend himself from the Zombie's attack.

Jonouchi plays a card he calls his secret weapon.

Episode 3 of the Toei anime, "Clash! The Strongest Monster" is based on this chapter and the next one. A number of changes were made including:

Episode 1 of the NAS anime, "The Heart of the Cards" is a mixture of this chapter and the Death-T arc. A number of changes were made including:

The character Seto Kaiba is based on a collectable card games player that a friend of Kazuki Takahashi met. Takahashi's friend asked this person to teach him how to play a card game, but he replied "Hmph! Come back when you've collected 10,000 cards". The story made Takahashi mad, but thought the player would make a good character. Kaiba uses the man from the story's line about collecting 10,000 cards in this chapter.[1]

Yu-Gi-Oh! had been a series of chapters, each with its own single storyline and featuring a different game in each story, up until this point. Duel Monsters proved to be largely popular, so Kazuki Takahashi decided to expand on it and base larger storylines on it.

The position many monsters appeared in after being Summoned, including "Ryu-Kishin" and "Blackland Fire Dragon" were used by Konami as their artworks in the OCG/TCG, rather than the artworks the cards had in the manga. The previous Yu-Gi-Oh! card game by Bandai had used the artworks featured on the cards in the manga.