From Yugipedia
Jump to: navigation, search
This article is about the manga chapter. For the Duel Links event, see Transcend Game Part 2 (Duel Links).

"TRANSCEND GAME (part 2)" (〈〉Toransendo Gēmu ❬kōhen❭) is the second part of a special two-part story of the Yu-Gi-Oh! manga, TRANSCEND GAME. It was released in the Weekly Shōnen Jump magazine on April 18, 2016 in Japan and on January 2, 2017 in the United States.

"TRANSCEND GAME" was authored by Kazuki Takahashi and is related to the Yu-Gi-Oh! The Dark Side of Dimensions movie, serving as a link between the end of the manga series and the film. 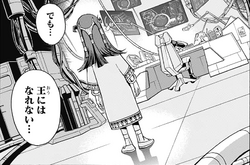 At Seto Kaiba's residence, a few weeks following his observation of the Neurons VR system testing, Kaiba continues to spend time making adjustments to the test model. He looks forward to the moment of completion, when he will enter the world of Duel Links himself and rule as its king. Kaiba hears a voice, saying "You cannot become King... Not ever...". He turns and sees the girl he noticed during the test session and smiles in admiration of her being able to slip inside.

Kaiba mentions having seen her earlier and the girl responds that she is the test subject whose duty it is to help shape his world. Kaiba glares at her and asks what she wants with him. She asks that he not make such a scary face and replies that she has simply come to relay a world of thanks. She elaborates that the Duel Links world assembles the consciousness of Duelists, giving players a new stage of battle. She questions the prospect an individual with a superior consciousness, transcending human wisdom being put in the mix. In this dimension, founded on disorder, people with high levels of consciousness gather together, granting access to another dimension, transcending the realm of the living, which she suggests may be the netherworld or a world of greater dimensions. She claims to have heard the voice of a very important person in the Links world, but that person is a resident of the netherworld. Kaiba is excited by the mention of the netherworld. The girl explains that if Kaiba were to sync with this limited superior consciousness, he might be able to do something. Before saying what that is, she disappeared on the spot. 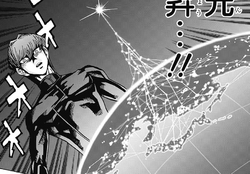 Kaiba recognizes the irregular data as the "dimensional ascension" he had been looking for.

Mokuba Kaiba appears on a screen before Kaiba and warns that they have trouble; there is unfamiliar data registering on the main branch laboratory's Duel Links surveillance monitor. He directs Kaiba to a projection of a globe and invites him to take a look for himself. The Neurons signals around the world are moving in an abnormal pattern, with the test subjects' neuro signals being drawn towards an unknown consciousness. The lights on the globe form a spike above Japan, with a single bright light on top. Kaiba recognizes this as the dimensional ascension he had been looking for.

Much to Mokuba's concern, Kaiba announces that he is going to access Duel Links and advances to a VR pod.

Inside the Neurons virtual reality, Kaiba appears in a "Blue-Eyes White Dragon"-themed jet. The other children testing the system look up in awe, recognizing it as Kaiba's battleship. One of them shouts at Kaiba, hoping for a Duel, but one of the others remarks that the strength of Kaiba's consciousness is way above their level, leaving them unfit to stand on equal ground. They wonder where he could be going.

By gathering the consciousness of Neurons, Kaiba says that the frequency will amplify infinitely and evolve into a superior consciousness, ascending to a higher-level dimension, which is where "he" lies.

As Kaiba stands on top of his jet, Prana appears next to him, in her own ship. She warns him that it is too dangerous to proceed. She explains that ahead of him lies the world of evil that transcends the realm and boundaries of mortal man and asks if he is prepared to step into such a place. Kaiba asks if she is questioning if he has fear in his actions. He warns her that anyone who stands in his way will be eliminated without mercy, so the one who needs to be prepared is her. 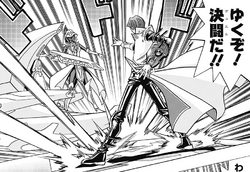 Prana offers to let Kaiba past if he can defeat her, the holder of superior consciousness, but should he lose, he will die. Kaiba replies that this is interesting and the two begin to Duel.

Prana Summons "Duza the Meteor Cubic Vessel", which has 8800 Pulse ATK. Kaiba Summons "Blue-Eyes White Dragon", which has 3000 Pulse ATK. "Duza" attacks with "Directional World Boost Knuckle", which Prana believes has easily defeated it. Kaiba says that if he were to give Prana one piece of criticism it would be her lack of consideration. She suspects that she has fallen for a trap, and Kaiba suggests that she might still be a child, who needs to learn how to better control her consciousness. The ATK of "Blue-Eyes White Dragon" rises to 5900 Pulse, due to Kaiba controlling his though frequency and then to 19900 Pulse. "Blue-Eyes" destroys "Duza" with "Burst Stream of Destruction", reducing Prana's Life Points to 0.

The "Prana" avatar fades away.

The outside of Prana's body digitally disappears, revealing underneath the body of the girl, who was speaking with Kaiba earlier. She is slightly annoyed with being defeated and having lost the avatar, which she had been fond of.

Kaiba admits to knowing Prana had been the young girl. She comments that she went through the effort of trying to stop him, but there is now no turning back. Kaiba is well aware and keen on facing "him" one more time to deliver the final blow to the deceased king.

The girl reports that they are almost at their destination and Kaiba Summons his "Blue-Eyes White Dragon". Nearby he sees Atem and comments that if that is the infinite darkness over there, he shall illuminate it.

In the real world, Chief Kuwabara reports that Kaiba's brainwaves are ascending at a rate beyond human limits, putting his life in jeopardy. 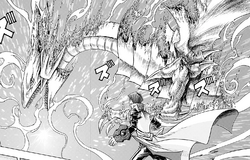 With Atem reflected in his eye, Kaiba thinks "Here... I come... Atem!!". However his "Blue-Eyes White Dragon" begins to digitally vanish, causing him to see Kisara.

In the real world, Mokuba pulls an emergency lever, behind some broken glass and thinks "Brother... you cannot handle anymore... You will die." This shuts off the Duel Links network, leaving the children with the Neurons gear bewildered and Kaiba waking up panting in his VR pod. Kaiba wonders if what he saw was a hallucination, but decides it was not and that he believes Atem was there. 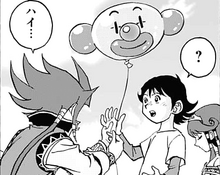 The boy returns the balloon to Tomo.

Elsewhere the young girl is sitting on a pillar, reading a book. She is approached by Tomo, who is holding a clown-head balloon and asks what she is reading. The girl replies "Huh... this?", but is distracted as Tomo lets go of his balloon, despite earlier instructions from the woman with him. The balloon then floats into the air, above his reach. As the girl resumes reading her book, she is approached by a boy, who tells her she was very close and returns the balloon to Tomo. Sera says that she is done with the book and hands it to Tomo, who thanks her. The boy, who returned the balloon, holds a cube-like object and says that Seto Kaiba is not somebody that they can easily eliminate.