"Monster Fight!! (Part 2)" is the forty-fourth chapter of the Yu-Gi-Oh! manga.

Dark Yugi and Koji "the Spider" Nagumo continue their Shadow Game of Monster Fighter. After trying to cheat cost him the previous game, Nagumo begrudgingly agrees to play fair.

Dark Yugi has just explained how they will be taking damage instead of their monsters in the Shadow Game of Monster Fighter that he is playing with Nagumo. Nagumo has just noticed the wound on his face that his monster should have received.

Nagumo picks up his monster "Wild Spider" to get ready for the next round. He understands that if he doesn't pay attention to the game, he will get hurt, but now it's Yugi's turn, he says. Yugi explains again that the game consists of three sets, that the first player to win two sets is the winner and that Yugi has now claimed the first set. Nagumo reminds Yugi that he too is a gamer and can play seriously if he has too. He hates to say it, but he agrees to play fair.

Nagumo claims to have learned to fight on the street as reflected by his Monster Fighter strategy; judging distance, skills and techniques as well as psyching his opponent out. Because of this he claims there is no way he could lose to a kid like Yugi, who has never been in a fight.

The second round starts. Nagumo calls out all his moves as he executes them and Yugi blocks. Nagumo yells "left hook" and Yugi gets "Killer Emaada" to put out its right hand ready to block. However "Wild Spider" barely moves its left arm and quickly pulls it back before Nagumo launches an attack with its right hand. Yugi realizes the left hook was a feint and doesn't have time to block the real attack. However Yugi switches off the power on his fighter, causing "Killer Emaada" to flop forward, avoiding the punch. Yugi promptly switches the power back on to continue the fight. 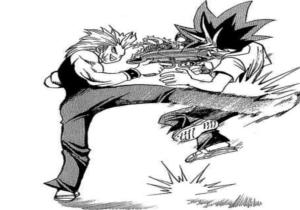 Yugi announces a middle kick. "Killer Emaada" raises its leg and Nagumo gets "Wild Spider" to block. However Yugi used the feint strategy, too, and "Killer Emaada's" leg quickly moves from mid-body to high and kicks "Wild Spider" in the head, which is its weak point. Nagumo's grip starts to vibrate, indicating he can't move his monster for two seconds. He knows that all Yugi needs to do now is pull his finishing move trigger to win. Nagumo refuses to lose to Yugi, so he quickly kicks him in the side, outside of the game, preventing Yugi from initiating his finishing move.

Nagumo laughs that this is how he fights and that the tables have now turned. "Wild Spider" has unfrozen and Nagumo gets it to crouch and duck under "Killer Emaada". "Wild Spider" quickly raises its head, throwing "Killer Emaada" into the air. Nagumo calls it a fly in a spider's web and has "Wild Spider" use its open air combo, "Spider Death Trap", where it launches an array of punches at "Killer Emaada". Due to the nature of the Shadow Game, Yugi feels the pain his monster would be taking.

Nagumo wins the round and laughs that the game is now even. Yugi is on the ground, gasping after having taken several blows. He wonders how low Nagumo can sink. Nagumo orders him to stand up for the final set. Yugi says that Nagumo has really made him mad. He removes his shirt. The clothing he is wearing underneath is damaged from the blows. Until now, the Shadow Game was Level 1, he says, but for the final round, he's raising the "Shadow Mode" to level 3. ("Shadow Mode" is simply referred to as "darkness" in the Japanese version.) Nagumo laughs and thinks Yugi is just trying to scare him. However, the Millennium Puzzle lights up and Yugi thinks that the Shadow Game shall now show Nagumo's true nature. 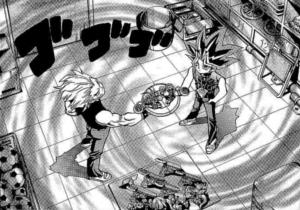 Darkness swirls around the two of them and Yugi informs Nagumo that he won't be able to cheat in this round. Nagumo isn't convinced and claims that he will win this round his way.

The battle starts with Yugi blocking most of Nagumo's attacks. Yugi eventually makes some attacks and knocks Nagumo's monster off balance. Again he hits "Wild Spider's" weak point, causing it to freeze for two seconds. 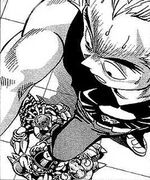 Nagumo gets ready to kick Yugi in the stomach again, but finds he is unable to move his leg. Yugi reminds Nagumo that he said he wouldn't be able to cheat in this game and advises him to look at his legs. Down at Nagumo's legs are the stolen Monster Fighters clinging on to him. Nagumo also sees "Wild Spider" down there and wonders what that means. Yugi explains that Nagumo's monsters refuse to take part in his evil, leaving him fighting alone, with no monsters to support him. Since "Wild Spider" is on the ground, Nagumo wonders what monster is on his field. Having betrayed his monsters' trust, Yugi says that the only monster left on Nagumo's side is himself. 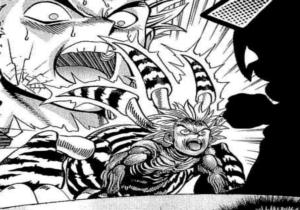 The "Wild Spider" on the field has now changed to have Nagumo's face. Yugi calls it Nagumo's inner-self, the part of him which is twisted into a shape to match his sick desires. Yugi activates "Killer Emaada's" finishing move, "Space Cannon". It launches a punch, which goes straight through Nagumo's monster.

A person can change their soul into any kind of monster, Yugi thinks, but in the end the shadows always eat them alive. As he leaves, Nagumo is left lying on the floor, with most of his body covered in shadows.