"Game Over" is the twentieth chapter of the Yu-Gi-Oh! manga.

On the side of the building, up near the roof, Jonouchi holds the board Anzu is standing on, as her supporting rope stands to break. Shadi is astonished, by the power of trusting your friends that Dark Yugi has just told him about. This causes his heart's ushebti to shatter, allowing the Millennium Key, it was holding up, to slide down to Anzu's hand.

The key hits Anzu's hand and she returns to normal. Wondering where she is, she gets a huge fright after looking down. She drops to her knees and Jonouchi struggles to hold-up the board. Saying that she's too heavy for him to hold up, Jonouchi tells her to get back onto the building. Anzu's asks what he is doing there. Jonouchi, now at breaking point, says that that is what he'd like to know.

Anzu can't move, as she's too scared that she's going to fall. Jonouchi has other problems as the zombie professor climbs up towards him. He yells at Anzu to hurry. Anzu turns around and starts to make her way back to the building. The professor grabs Jonouchi by the leg, causing him to lose his grip of the board. Anzu slips, but Yugi grabs her by the hand and helps her onto the building.

Relieved that Anzu is okay, Jonouchi focuses on what to do with the professor. Yugi calls Jonouchi and instructs him to make the professor touch the Ankh-shaped key. Jonouchi notices that Yugi is acting different, but proceeds to follow his instructions. He grabs he professor's hand and presses it onto the Millennium Key.

Like Anzu, the professor is returned to normal. He is unsure what is going on, but recognizes Jonouchi. He gets a major shock after looking down and realizing that he is missing a number of his teeth. Grandpa arrives on the roof, as Jonouchi and the professor climb over the roof fence.

Shadi faces Yugi and accepts his defeat. While he had used a number of illusions to test Yugi, to Shadi it has seemed that the image of friends trusting and helping each other was an illusion. Yugi has also realized something about the power of the Millennium Puzzle; no matter how far apart they are, friends will always come together as one. They are the pieces that bind together to become undefeatable power, just like a puzzle. The power of unity is the power of the puzzle, Yugi says, which surprises Shadi. 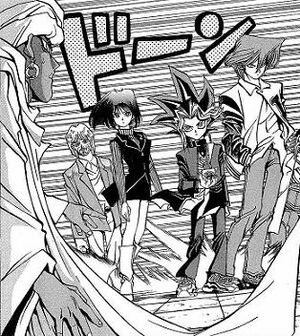 Yugi and his friends confront Shadi.

Yugi and his friends all face Shadi. Jonouchi addresses Shadi as the "dude in the dress". He does not know how Shadi got to this place, but threatens him to not come back anymore. Shadi agrees and turns to leave. Before going, he tells Yugi that he has passed all of his tests. Although he is beaten, he is pleased. His bloodline has been searching for a long time, for someone like Yugi. Yugi may be the one able to open that door he says and walks away. Shadi leaves and Jonouchi asks what "that jerk" was talking about.

Anzu gets Jonouchi's attention and asks him if Yugi seems different. Jonouchi agrees and Anzu wonders what this means. They approach Yugi about this, but find that he is back to his normal self. Yugi asks what's wrong, but they both blush and say nothing's wrong. Anzu and Jonouchi look at each other and wonder if they are crazy.

Yoshimori thanks everyone for coming and apologizes for not being able to offer them anything. He cannot remember what happened and hurts all over. Jonouchi blames Anzu for breaking his teeth, but she retorts that she only broke three. The gang celebrate as Grandpa offers to take them all out to eat.

As Shadi leaves the university, the board he had Anzu standing on and its supporting ropes disappear. The Millennium Key, which was attached to the setup falls and Shadi catches it below, saying "Goodbye, Yugi... We'll meet again!".