Sugoroku Mutou is a character appearing in the Yu-Gi-Oh! manga. This is the original depiction of Sugoroku Muto, known as Solomon Muto in most English media, as created by Kazuki Takahashi.

Sugoroku is the grandfather of Yugi Mutou. He was once a gaming master, who used his skills to master many different games and recover the Millennium Puzzle from the Tomb of the Nameless Pharaoh. He later opened a shop, Kame Game, where his family resided and he sold games to people in the area.

Suguroku was a gaming master, who tried and won all sorts of games all over the world.[4]

At the age of 40, he heard the legend spoken of amongst his companions, about the Shrine of the Game of Darkness said to be in Egypt.[4] 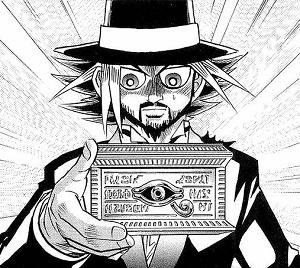 In the 1960s, Suguroku, along with Ahmet and Mushura visited the Valley of the Kings in Egypt. Here they entered the Tomb of the Nameless Pharaoh, finding it laden with the corpses of previous trespassers.[5]

Each room inside the tomb was treated like a game. One such room contained statues swinging swords, along a maze over a bottomless pit. Suguroku realized that the statues only moved if the traveler did not show respect, which was shown in ancient Egyptian ways by putting one's left foot forward, as the heart is on the left side of the body. Suguroku led Ahmet and Mushura across the pit, but towards the end, Mushura panicked and ran, causing two of the statues to impale and kill him. With Mushura dead, Ahmet held a gun to Suguroku, intimidating Suguroku to not let that happen to him.

In the final room, there was a bridge leading to the Pharaoh's treasure. Suguroku began to cross the bridge first with Ahmet pointing his gun at him. Once Suguroku got to the end, Ahmet fired at him, causing him to fall off the edge. With Suguroku hanging on with one hand, Amhet began crossing the bridge, but was consumed by a monster. The spirit of the Nameless Pharaoh appeared and helped Sugoroku up.

Once he reclaimed his senses, Suguroku collected the treasure, which turned out to be the Millennium Puzzle.

(At the beginning of the manga, Suguroku tells a contradictory story that the Puzzle was found by a different set of archaeologists.) 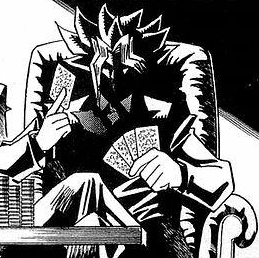 Otogi asked Sugoroku to take him in as a disciple gamer. After a while, Otogi challenged Sugoroku to a Shadow Game for the ownership of the Millennium Puzzle, using the Devil's Board Game, where each player was to bet a number of years of their life, each time they moved their piece. Sugoroku won the game, resulting in Otogi aging 50 years in one night as his Penalty Game. Otogi swore revenge on Sugoroku through his son Ryuji.

Suguroku got together with his wife, after sending her a love letter in the form of a jigsaw puzzle.[6] He got a son, who married Mrs. Mutou, who together had his grandson, Yugi Mutou.

Suguroku opened a game store, Kame Game, where he lived with Mrs. Mutou and Yugi.

At around the age of 63, he let Yugi have the Millennium Puzzle, to try solving it.

Sugoroku was given the rare Duel Monsters card, "Blue-Eyes White Dragon" from an American gamer friend.[7]

When Sugoroku was 71, Yugi was visited by Anzu Mazaki after school one day. Anzu was surprised to see Sugoroku alive, since Yugi had told her earlier that the Millennium Puzzle was a memento of his grandfather. Sugoroku yelled that he was not dead and Yugi corrected himself saying that it was going to be a memento. Sugoroku commented on how Anzu had grown since he last saw her, especially around her bust. As Yugi went upstairs to work on the puzzle, he insisted that the Puzzle is beyond human understanding and that the archaeologists who discovered it, died mysterious deaths with the last one uttering "The Shadow Games" in his dying breath. However Yugi thought that the Shadow Games sounded awesome, so he still wanted to finish it and ran away from Sugoroku who tried to take it so he could sell it. The next day Sugoroku was visited by Katsuya Jonouchi, who returned a lost piece of the Puzzle and explained that Ushio was giving Yugi a hard time. After Yugi came close to finishing the Puzzle that day, Sugoroku gave him the piece, so he could complete it. Unbeknownst to Sugoroku and even Yugi, Yugi's body became host to a part of the Nameless Pharaoh's soul Dark Yugi, who was stripped of his memory and would occasionally take control of Yugi's body.[8]

One day, Yugi and Jonouchi brought Hiroto Honda to the shop, in search of a gift for the girl he had a crush on, Miho Nosaka. Sugoroku sold them a love jigsaw puzzle similar to the one he gave to Yugi's grandmother.[6]

Seto Kaiba entered the game shop one day and was surprised to see Sugoroku had a "Blue-Eyes White Dragon". He tried to trade for and buy the card, but Sugoroku refused as he got it from a dear friend and its sentimental value was priceless. Kaiba later tried to steal the "Blue-Eyes White Dragon", but was defeated by Dark Yugi in a Shadow Game of Duel Monsters and given the "Experience of Death" Penalty Game.[9]

Sugoroku's friend Professor Yoshimori, along with Curator Kanekura put on an Egyptian exhibition, The Art of Egypt, at the Domino City Museum, and Sugoroku, along with Yugi and Yugi's friends were all given free admission.[10] Professor Kanekura died that day under suspicious circumstances, believed to have been for defiling a pharaoh's tomb. Yoshimori worried about this, but Sugoroku and the others came to visit him at the university to cheer him up. However Yoshimori became possessed by Shadi and started attacking the gang. Sugoroku got knocked-out in the struggle.[11] Shortly after Dark Yugi defeated Shadi in the Trial of the Mind Shadow Game, Sugoroku woke-up and found everyone else on the roof. After Shadi left, he treated everyone a meal out.[12] 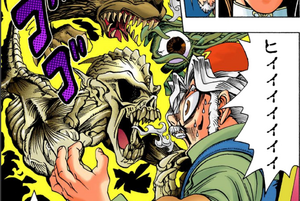 Kaiba forced Yugi to go through Death-T, a series of games and amusement park rides intended to kill Yugi, in exchange for Suguroku's life. Before Yugi began, Sugoroku gives him his Deck to use to defeat Kaiba.[14]

Yugi defeated Kaiba in the end and Sugoroku was saved by emergency surgery.

Sugoroku communicates with Yugi, while trapped in the video.

Maximillion Pegasus, the creator of Duel Monsters, sent Yugi a videotape inviting him to participate in his Duelist Kingdom tournament. Pegasus appeared on the tv screen and invited Yugi to Duel him on the spot. Dark Yugi wound up facing Pegasus in a Shadow Game of Duel Monsters. As a penalty for Dark Yugi's defeat, Pegasus trapped Sugoroku's soul in the video tape.

Yugi entered the Duelist Kingdom tournament in the hopes of returning his grandfather to normal. Throughout the tournament he carried around a video camera, containing the tape Sugoroku was trapped in, so they could communicate.

After Yugi and Dark Yugi defeated Pegasus, Sugoroku was returned to normal.

He said goodbye to Yugi before Yugi left, and was trying to look for Yugi along with his friends when he was missing.

He, along with Anzu and Honda, watched Jonouchi Duel in the Battle City preliminaries. When Bakura was injured, he took him in to the hospital. Sugoroku then called Yugi and his friends to tell them that Bakura had gone missing.

Sugoroku watched the Rite of the Duel, witnessing Atem's departure to the afterlife. 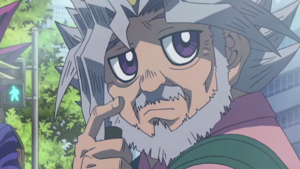 Sugoroku in The Dark Side of Dimensions