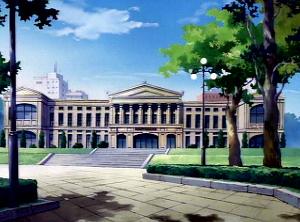 Domino City Museum, in the anime

Domino City Museum, known as Domino Art Museum ( Domino Bijutsukan) in the Japanese version, is the museum in Domino City. It appears a number of times throughout the series, displaying exhibitions of Ancient Egypt. 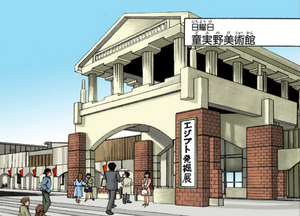 Domino City Museum, in the manga

Curator Kanekura and Professor Yoshimori put on the Egypt Unearthed exhibition, displaying treasures they found from their excavation of a tomb in the Valley of the Kings. Among the objects taken from the tomb were the mummy itself and papyrus depicting the Weighing of the Heart. Yugi Mutou and his friends visited to the exhibition. Kanekura took this opportunity to put Yugi's Millennium Puzzle on display and attempted to sell it for his own profit. Shadi also went, in order to punish Kanekura and Yoshimori for defiling the territory of the Gods. He performed a Weighing of the Heart Shadow Game, Question of Truth, with Kanekura, killing him. Afterwards he spotted the Millennium Puzzle and learned that Yugi had solved it. Shadi entered Yugi's soul room while in the museum to test Yugi, but wound up being tested by Dark Yugi in the Labyrinth Treasure Hunt. Shadi also intended to put Yoshimori on trial, but after finding he was expecting to see Yugi, he used Yoshimori in a game to test Yugi, the Trial of the Mind.[1][2][3]

Ishizu Ishtar put on The Art of Egypt exhibition at the museum. The exhibition included a giant tablet depicting a battle between the Seto and the Atem, whom she only knew as the "nameless pharaoh". She tried to use this to alert Seto Kaiba of his connection to the past and persuade him to put on the Battle City tournament to gather the God cards. Dark Yugi and Anzu Mazaki also visited the exhibition. Ishizu recognized Dark Yugi as the incarnation of the pharaoh and showed him the tablet.

Ishizu Ishtar held an exhibition at the museum. It included a giant tablet, depicting a battle between Seto and Atem, whom she only knew as the "nameless pharaoh". She tried to use this to alert Seto Kaiba of his connection to the past and persuade him to put on the Battle City tournament to gather the Egyptian God cards. Yami Yugi and Téa Gardner also visited the exhibition. Ishizu recognized Yami Yugi as the incarnation of the pharaoh and showed him the tablet.

An exhibition of treasures found in a tomb, including the Pyramid of Light were put on display. Yugi and Téa visited it as they hid from a group of Duelists, who were after Yugi's Egyptian God cards.[4]

Domino City Museum appears in Yu-Gi-Oh! The Sacred Cards, where is it is known as the art museum (美術館 bijutsukan), shortened to art in the English version.

Initially, two KaibaCorp men blocked the player from entering the museum. The player Dueled Ryou Bakura and a generic Duelist outside the museum.

When the Ghouls became rampant, three of them stood at the entrance to the museum. The player Dueled the one in the front. The other two would not Duel and continued to block the entrance.

While searching for Joey Wheeler and Tea Gardner, who had been taken captive by the Ghouls, the player and Yugi Muto went to the art museum to find Seto Kaiba. Outside the gallery, Kaiba pinpointed the coordinates of Joey's Duel Disk. His men continued to block entrance to the museum.

When testing who was worthy of being entrusted with "Obelisk the Tormentor", Ishizu Ishtar invited Seto Kaiba and the player to the art museum. Inside the gallery, she showed the player a tablet depicting Diaha, the origin of Duel Monsters and told him about the power said to be bestowed on whoever obtains the three Egyptian God cards. She then Dueled the player and after he won, had him Duel Kaiba to determine who was worthy of "Obelisk the Tormentor".