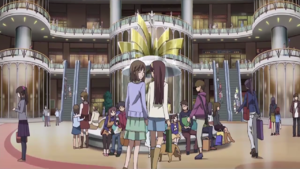 The shopping mall (ショッピングモール shoppingu mōru) in Domino City is a location, appearing in Yu-Gi-Oh! The Dark Side of Dimensions.

Otogi's father opened a cafe at the mall, employing Ryuji Otogi as a waiter and Katsuya Jonouchi as a mascot.

Yugi Mutou, Anzu Mazaki, Hiroto Honda and Ryo Bakura ate here at Otogi's cafe. Yugi, Anzu, Bakura and Honda discussed the mysterious worldwide disappearances. Bakura commented on the unease he felt, knowing someone could be secretly watching them, but Anzu they were probably harmless and gestured to Bakura's fanclub, who had secretly been watching him.

News of Seto Kaiba's new Duel Disk was shown on a big screen in the mall. Jonouchi groaned, suspecting it would be expensive and was teased by Honda. Since Honda was mending Jonouchi's older model Duel Disk, Jonouchi took the opportunity to accuse him of breaking it, demanding compensation. This led to a fight, resulting in Jonouchi's firing.

Diva monitored Yugi, Bakura and their friends from the upstairs balcony in the mall. A projection of Mani appeared next to him and tried to talk him out of his revenge plans, claiming it is not what Shadi Shin would want. When Mani informed him that the Millennium Puzzle had been found his projection disappeared and Diva teleported to the Valley of the Kings. His sudden displacement was noted by Seto Kaiba, who later asked how he was able to quickly travel from one part of the world to another, while showing footage of him at the mall.