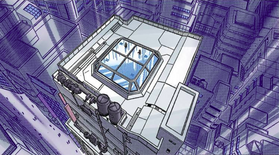 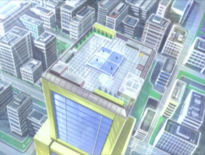 The skyscraper, in the manga and anime

The skyscraper is a location in Domino City, in the Yu-Gi-Oh! manga and anime. Yami Yugi and Seto Kaiba Dueled Umbra and Lumis on the skylight on the top of this building, in a dangerous game where the losers would fall to their death.

In the manga, the skyscraper is 13 stories high. (The English manga also says that it is 130 feet high, which is about 40 meters). In the anime, the building is 130 meters tall.

Mask of Light attached a Duelist's Chastity Belt to Seto Kaiba's Duel Disk and instructed Kaiba to meet him and Mask of Darkness at the top of the building, which he called the "Arena of Death", to have it unlocked. He told Dark Yugi to come too, threatening to otherwise harm Katsuya Jonouchi, whom the Rare Hunters were also watching.[1]

At the to top of the building, each of the four Duelists stood on a separate pane of skylight. Each pane had an explosive device linked to their Life Points, which would destroy the glass below the corresponding player when their Life Points reached 0. The team to defeat both opposing players would win.[1]

Mask of Darkness was defeated in the Duel, but used a parachute to save himself, after his quarter of the skylight was destroyed. Although Kaiba was adamant that they defeat Mask of Light too, the Duel ended after Marik Ishtar used the Millennium Rod to take control of Mask of Light's mind to speak with Dark Yugi and Kaiba.[2]

Rather than using the Duelist's Chastity Belt, the Rare Hunters kidnapped Mokuba to persuade Kaiba to come to the top of the skyscraper.[3]

In Yu-Gi-Oh! The Sacred Cards, the skyscraper is referred to as the building. The building has three floors, not counting the rooftop.

Mai Valentine went to the building, after collecting five Locator Cards in the Battle City tournament. She hoped to find Joey there to win her sixth, but did not find him. The player could optionally face her in a Duel with no Locator Cards on the line.

A number of Duelists went to the arcade on the first floor to take a break from Dueling. This included two people who had lost to Espa Roba and Seto Kaiba and played the Super Dancer game. Joey Wheeler also took a break and was playing the claw machine, until he saw the player's progress and decided to get back to Dueling.

The Kaiba fangirl hung around outside the building, but relocated to the bridge underpass, in search of Kaiba.

A number of Duelists on the second floor organized a tournament among themselves. One of them later left to search for Duelists outside.

Mokuba Kaiba came to the building, but was kidnapped by Lumis and Umbra, who hoped to use him as bait to lure in Seto Kaiba. However they instead caught the attention of the player and Yugi Muto, who had been looking for Mokuba. Lumis and Umbra then Dueled the two of them at the top of the building and lost.