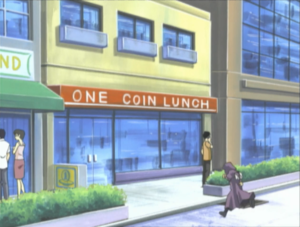 One Coin Lunch is a restaurant in Domino City in the Yu-Gi-Oh! anime. The name of the restaurant is erased in the English dub.

The name of the restaurant would suggest that it serves lunches that can be afforded with a single coin. This would mean lunches could be purchased for no more than ￥500, which is the largest denomination of yen coin. This was about US$3.70 in 1997, the time the episode it appeared in was set.

Lumis jumped onto the sign outside the building, the sign at the top of the ground floor, the balcony, and then the roof while making his way to the skyscraper after telling Yami Yugi and Seto Kaiba to meet him there after taking their friends hostage.