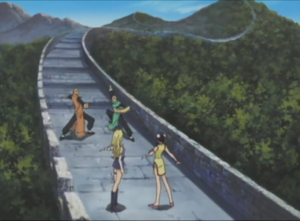 The Great Wall of China is a series of ancient walls built across borders of historical Chinese states to protect against threats from the north. The wall makes appearances in the Yu-Gi-Oh! anime and Yu-Gi-Oh! Reshef of Destruction.

At some point after the Battle Ritual, Mai Valentine and Vivian Wong Dueled against the Paradox Brothers on the wall. (This scene was not included in the English dub.)[1]

Ishizu Ishtar instructed the player, Yugi Muto, and Joey Wheeler to go to Great Wall of China to find a Millennium Item.

At a food stall on the Great Wall the player and his friends encountered Para, who tried persuading them to buy his Great Wall noodle soup. They also met Dox, who blocked them from entering a watchtower. Joey noticed the two seemed familiar and the player confronted Para, defeating him in a Duel. Para admitted his true skill was in Tag Dueling and called Dox to join him. Seto Kaiba then arrived and sided with the player. Although, it is implied a Tag Duel takes place in-universe, in reality the player chooses either Para or Dox and faces them in a regular Duel.

During the Neo Ghouls invasion, Espa Roba advised the player to find more Duelists to help them fight the Neo Ghouls. Among his searches, the player went back to the Great Wall of China, where he found Lumis and Umbra attempting to recruit Weevil Underwood as a Neo Ghoul. Weevil seemed to be willing to join at first, but changed his mind, prompting them to challenge him to a Duel. Knowing he could not defeat the two of them at once, Weevil asked the player to choose one to Duel, while he Dueled the other. The player and Weevil proceeded to win and Weevil agreed to return to Domino City to help battle the Neo Ghouls.

Mokuba Kaiba was kidnapped by the Paradox Brothers to bait Seto Kaiba into coming to Pegasus Castle. The player wanted to help, but did not know where to find the castle. A Millennium Guardian informed him to seek out Paradox (distinct from the Paradox Brothers), who could be found in China and would show them the way.

Paradox appeared before the player, Yugi and Joey at the Great Wall of China and questioned why they wanted to find Pegasus. Yugi said that it was to stop Reshef the Dark Being. Paradox proposed that the Egyptian Gods may be able to defeat Reshef and noted that the player's "The Winged Dragon of Ra" was still in Sphere Mode and would need to be restored to Battle Mode.

The player returned to the Great Wall of China after getting the Battle Mode for "The Winged Dragon of Ra", as Paradox had recommended. But having spent so much time in the mountains and grown bored, Paradox decided to tease the player and his friends with a game, rather than immediately tell them where to find Pegasus Castle.

Paradox ran and the player, Yugi and Joey had to catch and Duel him to get the information. They were blocked along the way by Millennium Guardians, who awarded the player a card each time they were defeated. After defeating five, Paradox would quiz him on the cards he was awarded and Duel him if he answered correctly. Failure at any point meant the player would have to start the chase again. Since the player received five cards with incremental Levels, from one to five, knowledge of this made it easier to answer Paradox's multiple-choice questions without memorizing the specific cards.

Paradox told the player that they could find Pegasus Castle on his island, which was cloaked by a magical barrier, which he proceeded to remove.