The Paradox Brothers, known as the Labyrinth Brothers (迷宮兄弟 Meikyū Kyōdai) in the Japanese version, are a tag team, consisting of the twin brothers, Para and Dox. Their names are derived from the word paradox in the dub, while their names in the Japanese version form the word "Labyrinth" (迷宮 Meikyū), which is spelled out by the kanji on their foreheads. Para has the kanji 迷 (mei), while Dox has the kanji 宮 (kyū). In the English manga, the word "Labyrinth" in their name is left untranslated, making them the Meikyū Brothers. 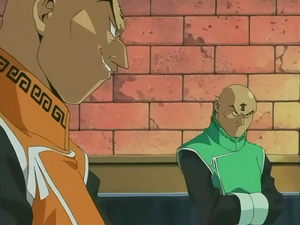 Para and Dox in their labyrinth arena

The brothers were hired by Maximillion Pegasus to work as Eliminators in his Duelist Kingdom tournament. The two Duel as a team, with their "Labyrinth Wall" card enabling them to change the playing field to resemble a complicated underground labyrinth, making gameplay more akin to a board game than a card game. The two guard an underground area of the island. It is here that they meet Yugi Muto and Joey Wheeler, who must defeat them in order to pass and move onto Pegasus' castle. They begin a Tag-Team Duel against one another, and the Brothers have a cohesive strategy, with their Decks built to play off of each other's. In addition to changing the gameplay, the brothers Deck's focus on the Summoning of their powerful "Gate Guardian" monster, by gathering its component pieces onto the field.

Though they come close to victory, the brothers are defeated when Yugi fuses his "Summoned Skull" with Joey's "Red-Eyes B. Dragon" with "Polymerization" to form "Black Skull Dragon", whose attack strength was able to surpass that of their "Gate Guardian" when Joey uses his "Copycat" card to use the brother's own "Riryoku" against them. With their victory, Yugi and Joey both obtain enough Star Chips to gain entry into the tournament's final rounds. However, the Brothers still have another test that Yugi and Joey must pass. They inform them that one of the doors that leads out of the room will let them leave the caves, while the other simply leads to an endless maze. The brothers claim that from here on out, one of them will speak only lies, while the other will speak only the truth. Yugi realizes that both brothers are in fact lying, and they even have the ability to change which path leads where. They are tricked into admitting this via the use of a two-headed coin, and Yugi and Joey are able to move on. 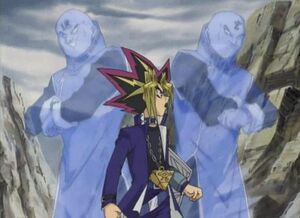 In the Waking the Dragons arc, they both appeared as lost souls as Yami Yugi ventured to find his other half.[1] In the epilogue of the series, which is cut from the dub, the brothers are seen Dueling Mai Valentine and Vivian Wong on top of the Great Wall of China.[2] 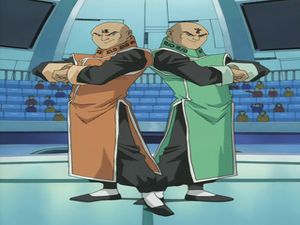 The Paradox Brothers challenge Jaden to a Duel.

The Brothers are hired by Dr. Crowler to Duel Jaden Yuki and Syrus Truesdale, who will be expelled should they lose, due to their trespass at the Abandoned Dorm. They are introduced as legendary Duelists who fought against the King of Duelists, Yugi Muto, and gave him a hard time with their powerful combinations. The Duel is conducted in a more normal fashion this time, with the two Dueling using standard Duel Disks.

Their strategy still involves the Summoning of "Gate Guardian",[3] but they also reveal an even more powerful force — "Dark Guardian", who can only be Summoned upon the destruction of "Gate Guardian". The brothers focus their efforts on Syrus, believing him to be the weak link of the opposing team. This is very successful, but Jaden eventually gives Syrus the confidence to continue, and the brothers are once again defeated when their opponents pool their resources to Summon a Fusion Monster.

This time, Syrus uses his "Power Bond" card to fuse his "UFOroid" with Jaden's "Elemental Hero Tempest", forming "UFOroid Fighter" and doubling its ATK to 8000, enough to attack "Dark Guardian" and wipe out their Life Points, even though it cannot be destroyed by battle.[4]

In the dub, the brothers speak using Chinese accents and almost exclusively in rhyme, with one brother finishing the sentence the other began. This is not present in the original.

The Brothers play Labyrinth Decks, which focus on bringing out "Gate Guardian".