The anime version of this character was an assassin, rather than a graverobber. 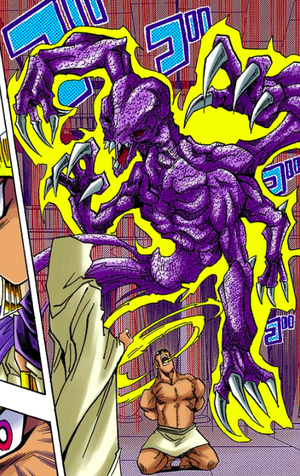 Dark Spirit of Chaos being extracted from the criminal

Negative emotions created the Dark Spirit of Chaos monster ka in the man's soul. This drove him to commit crimes, strengthening the ka. The criminal attempted to steal from Pharaoh Akhenamkhanen's tomb, but found no treasure,[1] as it had already been raided by Bakura, King of Thieves.[2]

The criminal was captured and brought before Pharaoh Atem. He pleaded innocent, as he had not stolen anything, but was told by the guards that he would still face the judgment of the gods, for stepping on sacred grounds. Shada used the Millennium Key to look into the man's heart, where he saw the shadow of an evil ka. Akhenaden then used the Millennium Eye to expose the Dark Spirit of Chaos, after which Seto completed the exorcism by using the Millennium Rod to seal it within a stone tablet.[1] Seto suggested that the criminal be executed for the amusement of the Pharaoh and to set a warning for future thieves. Akhenaden argued that it was unnecessary, as the evil ka had been removed and that it was the duty of a priest to show mercy. Akhenaden then had the man sentenced to seven years hard labor.[2]

When Atem entered his World of Memories, the judging of this criminal was the first event that he re-witnessed.[1]