Mana (マナ Mana) is a character in the Yu-Gi-Oh! manga. This is the original depiction of Mana. 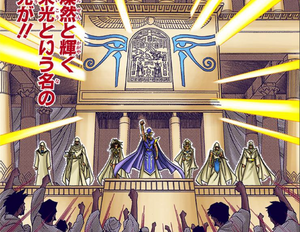 Seto upon being crowned pharaoh, with Isis and Mana

Mana was an apprentice to Mahado. She once appeared before Mahado after hiding in the pots outside of the palace. Mahado sensed her there and told her to come out. After popping out of the pot, she exclaimed how she would do her training later and Mahado responded by telling her she would never become a sorcerer that way.[2]

After Mahado's death, she swore to become a great magician and eventually was able to summon her own ka, the Dark Magician Girl.

After Zorc's death in the Shadow RPG, Mana became a Priestess and wielder of the Millennium Ring under the newly crowned Pharaoh, Seto.