The Big Five, initially known as the "executives for Kaiba Corporation," are a group of five corporate executives that used to work for Gozaburo Kaiba, producing weapons of mass destruction for KaibaCorp, and then later for Seto Kaiba making video game software.

Starting off as minor villains in Duelist Kingdom, they later become the main antagonists in the Legendary Heroes arc and secondary antagonists of the Virtual World arc.

They often form alliances with individuals that can give them more power, as they go from working for Gozaburo Kaiba, to Seto Kaiba, to Maximillion Pegasus, and finally, to Noah Kaiba. 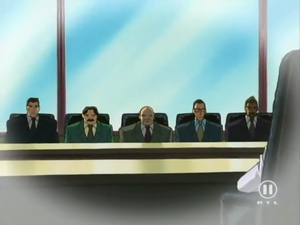 The Big Five with Seto.

At some point they were hired by Gozaburo Kaiba to work for KaibaCorp, a military arms company.

When Gozaburo's adoptive son Seto decides to make his play for power, he convinces the Big Five he'll restore them to their former power and claims that Gozaburo does not give them the respect or power they deserve. The Big Five agree, and thus buy 49% of KaibaCorp. Combined with 2% that Gozaburo had previously given to Seto for a test to prove his business skill, the Big Five vote out Gozaburo and vote in Seto as the president of the company. However, Seto quickly backs out on their deal, stripping them of their power and leaving the Big Five little more than figureheads and consultants. KaibaCorp would soon be converted into a video game software company where he had Nezbitt destroy his weapon labs and rejected Crump's idea for a penguin theme park as part of a KaibaCorp project.

The Big Five with Pegasus.

Furious over their betrayal, the Big Five strike a deal with Maximillion Pegasus, similar to their previous deal with Seto: if Pegasus defeats Seto and Yugi Muto in Duels, then they will vote Pegasus into power of the company by kidnapping Seto's brother Mokuba, who has been entrusted with the card that contains the information the Big Five need to take over the company (In the dub, they need a Kaiba family member to make any control legal) Although shadowed during this time, the Big Five are first unshadowed when they watch Maximillion Pegasus' Duel against Yugi Muto on their monitor. However, the plan fails when Yugi defeats Pegasus in a Duel.

In the manga, the Big Five are fired by Seto and never seen again. 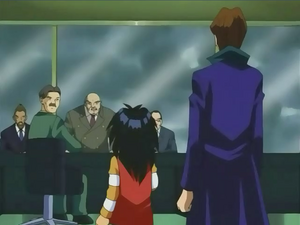 In the anime, when Seto learns of their betrayal he threatens to fire them. The Big Five offer Seto the opportunity to test his complete Virtual Reality game as a peace offering. In reality, they plan to trap Seto in the game so they can take control of KaibaCorp. When Yugi Muto and Joey Wheeler enter the Virtual World with Mokuba to rescue Seto, the Big Five send Kemo and two other operatives to unplug their pods, which would trap them all. While Téa Gardner and Tristan Taylor stall the thugs, the Big Five enter the game and Summon "Mythic Dragon". The dragon is defeated and the heroes return to the real world. After their defeat, the Big Five somehow become trapped in virtual reality.

For some time, the Big Five wander KaibaCorp's computer banks until they are found by Gozaburo's biological son Noah. Noah also desires to take control of Kaiba Corporation from Seto, and strikes a deal with them. Noah lures Seto Kaiba, Yugi, and his friends to an underground military base, and there forces them to enter his version of the Virtual World. The Big Five greet them and reveal the deal they have made with Noah: after being trapped in the Virtual World, they have lost their connection to their real-world bodies and thus need new ones. In exchange for being allowed access to the bodies of Seto, Yugi, and his friends, the Big Five will defeat each of them in a Duel. 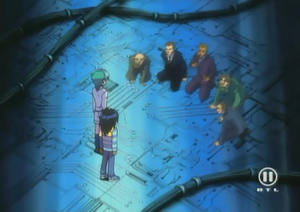 Taking the physical appearance of their respective Deck Masters in their Duels, one by one the Big Five fail to defeat their chosen opponents, each underestimating the gangs' natural feel for the game as opposed to the Big Five's more calculated business-like strategies (although the inexperienced Téa needed some help from Yugi to win her Duel against Crump).

However, Nezbitt was able to defeat Tristan in a three-one-one Duel (which also included Duke Devlin and Serenity Wheeler) when Tristan sacrificed his remaining life-points to save the struggling Serenity. Although Nezbitt still lost the Duel overall, he took over Tristan's body despite his promise to return it. In Tristan's body, Nezbitt kidnaps Mokuba and hands him over to Noah and shortly afterwards the remaining Big Five attempt to steal the remaining gangs' bodies by force.

Although Noah is furious at their losses and rule-breaking in their attempted body stealing, he offers the Big Five a last ditch effort to all use the body of Tristan and Duel Yugi and Joey in a two-on-one match. With the Big Five initially rotating control of Tristan's body while communicating with each other in his mind, they were able to combine their Deck Masters into one monster, but they once again failed to defeat them and are summoned back to Noah's headquarters after trying to take the gang's bodies by force a second time, which infuriates Noah. Despite their pleas, Noah refuses to give them a third chance. In the original Japanese version, Noah deletes the Big Five. In the dub, he imprisons each of the Big Five in an isolated portion of the Virtual World, and they are eventually "deleted" when the Virtual World destructs. 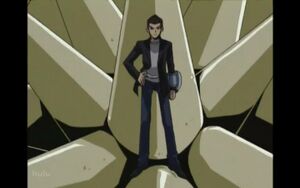 In this Duel they use a Deck of their combined powers, highlighted by "Mythic Dragon", the monster they attempted to use to trap Seto in the Virtual World before he fired them. They were nevertheless defeated when Yugi and Joey combined their Deck Masters ("Dark Magician" and "Flame Swordsman") to form "Dark Flare Knight", subsequently using its effect to Summon "Mirage Knight" to destroy "Mythic Dragon", before destroying their "Berserk Dragon" by transforming "Dark Magician" into "Dark Magician Knight" and transferring most of the ATK of "Flame Swordsman" to him, thus giving him the strength to defeat "Berserk Dragon".