The Winged Dragon of Ra (character)

Ra is a giant golden dragon that appears to be composed of or covered in golden metal. It has a saurian posture and bird-like features; its head and neck are sculpted to resemble that of a bird of prey, with feather-like ornaments on each side of its head and at the elbows, and a jagged cone surrounding its neck. Its wings have the appearance of being feathered. Ra has a large arch connecting its shoulder pauldrons that is where its "Blaze Cannon" attack is generated before being channeled to its mouth through the feather-like ornaments on its head. During the opening to the Memory World arc, Ra's beak is toothless and more bird-like in shape and its tail is thinner. This is the form it uses in its first legal artwork, though in that artwork it also possesses a feather-like plume rather than a bony tail. Unlike the manga however, it retains its original form within the series itself.

In Ra's Sphere Mode it appears as an orb of golden metal that unfolds into its Battle Mode. In its Phoenix Mode Ra becomes a giant flaming bird with its wings and head shaped in a similar manner to its Battle Mode.

Ra is one of the three Egyptian Gods, along with Obelisk the Tormentor and Slifer the Sky Dragon. These monsters were only capable of being summoned by the Pharaoh.

The Egyptian Gods as cards.

3000 (5000 in the dub) years later, Maximillion Pegasus created cards depicting the three Egyptian Gods, for his game Duel Monsters. Pegasus was unable to decipher the hidden powers of Ra, which were written in Hieratic text, so he transcribed the Hieratic text onto the card. This text was only visible in the light emitted from 'Ra' and had to be recited in order to Summon "The Winged Dragon of Ra".

The souls of the Gods came to dwell in the cards, making them powerful weapons. On realizing this, Pegasus regarded their creation as one of his greatest mistakes. He tried to destroy the God Cards, but could not bring himself to do it, so he had the Egyptian supreme council of antiquities bury the cards in different locations in the Valley of the Kings. The Rare Hunters managed to steal the "Slifer the Sky Dragon" and "The Winged Dragon of Ra" cards. However the Egyptian supreme council of antiquities was able to prevent them finding the "Obelisk the Tormentor" card. Ishizu Ishtar, from the council, later gave it to Seto Kaiba, so that he would host the Battle City tournament to retrieve the other two.

The leader of the Rare Hunters, Marik Ishtar entered the Battle City tournament with the "Slifer" and "Ra" God cards.

Odion, posing as Marik, Dueled Joey Wheeler in the quarter finals. Towards the end of the Duel, Joey expressed disbelief that his opponent was Marik. Marik then tried to create some false proof by having Odion Summon "The Winged Dragon of Ra". He believed Odion would be capable of Summoning it. However the card was a counterfeit and this angered the real Ra, who smote the Dueling arena with lightning and struck down both Duelists.[1][2] 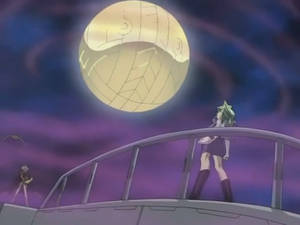 During Mai Valentine and Yami Marik's quarter final Duel, Mai took "The Winged Dragon of Ra" using the effect of "Amazoness Chain Master". However when she Summoned Ra, it appeared in its Sphere Mode. Unable to read the Hieratic text, Mai could not Summon it. On his next turn, Yami Marik recited the inscription and Summoned Ra to his side of the field. He prepared to attack Mai, who was held still by his torture cards. The nature of the Shadow Game, meant that this attack would kill Mai. However as Joey tried to free her, Yami Yugi stood between them and Ra and took its blast on his back, preventing Mai from dying. Kaiba used satellites to get images of the Hieratic text and was surprised to find that he was able to read them.

In the night, Yami Bakura, with the help of Marik, Dueled Yami Marik. However Yami Marik defeated them with Ra's Point-to-Point Transfer ability.[3] 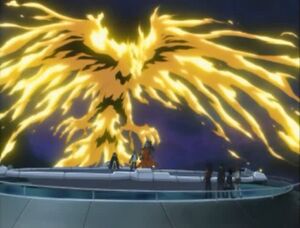 During the semi-final Duel between Joey and Yami Marik, Yami Marik Special Summoned "The Winged Dragon of Ra". Since he did not Tribute any monsters, its ATK and DEF became 0. However Yami Marik converted Ra to its Egyptian God Phoenix form and destroyed Joey's monster. This inflicted immense pain on Joey, which Yami Marik did not expect him to withstand. Joey did manage to stay standing after the attack, but collapsed during his turn before he was able to finish the Duel.

Yami Marik and Yami Yugi Dueled in the finals. Yami Marik demonstrated the rest of Ra's abilities, but ultimately lost the Duel. Yami Yugi then received "The Winged Dragon of Ra" card through the tournament's rules.

In order to regain his memories, Yami Yugi presented the three Egyptian Gods to the stone tablet in the museum. However, the God cards began to crackle with dark energy as Dartz drained their power. Yami was then interrupted as Duel Monster spirits began appearing throughout the city. Later that day, Dartz's men broke into Kame Game and stole the God Cards.[4] Dartz placed the cards in the mouths of three stone serpents in order to use their power to summon The Great Leviathan.[5]

After defeating Dartz in a Duel, Yami retrieved the Egyptian God cards, though their strength had already been drained.[6] After Yami Yugi's soul had been absorbed into The Great Leviathan, the other souls Dartz had captured were able to lend him their strength. With it, Yami called out, "In the name of the Pharaoh, awaken!" and summoned the three Egyptian Gods. By summoning them, Yami was also able to free himself, Joey Wheeler and Seto Kaiba from the Leviathan. Ra, Obelisk, and Slifer engaged in battle with The Great Leviathan. The three were empowered by the light of other people's souls, defeating it.[7] However the Leviathan reappeared in a different form within Dartz, which Yami managed to defeat.[8]

When Yami Yugi entered the World of Memories, he relived some of his life as Pharaoh Atem, and fought the battle against Bandit King Bakura, in which he summoned Slifer, again.[10] This time after Slifer was defeated by Diabound, Yugi and his friends arrived on the scene and Yugi was able to lend Atem strength, allowing him to Summon Ra and defeat Diabound. However, Yami Bakura at the Shadow RPG table used an Hourglass Token to reverse time. This time, Yami Bakura distracted Yugi, so that he would not reach Atem and Ra was not Summoned.

The Pharaoh used the three Egyptian Gods to battle Zorc Necrophades. However Zorc managed to overpower them and turn them into stone.[11] Upon relearning his name, Atem was able to summon the three Gods again, this time from the cards in Yugi's Deck. He then combined them into Holactie the Creator of Light, who defeated Zorc.[12]

Yugi and Atem constructed separate Decks for the Battle Ritual, which Atem needed to lose in order to pass on to the afterlife. Despite needing to lose, Atem gave the Duel his all. He included the three Egyptian God cards in his Deck and managed to Summon the three of them at once in the Duel. However Yugi was able to destroy them and win.