Aknamkanon, known as Akhenamkhanen in the Japanese version, is a character in the Yu-Gi-Oh! anime. He is the older twin brother of Aknadin, the father of Pharaoh Atem, and the first owner of the Millennium Puzzle.

As Pharaoh, he is very calm, serious, and very loyal at heart, though his ruling during his time had made him a negotiable king between Egypt and his neighboring enemies and try to find a peaceful solution to their problems. His brother, Aknadin, however, was starting to advance his armies without his knowledge. Seeing things had gotten out of hand when the enemies had made their approaches his kingdom, he feared that end of his kingdom has come. Suddenly his negotiable option changes into a secondary choice of action when he gives Aknadin permission to create the Seven Millennium Items to protect his kingdom from the advancing enemies.

He showed that he deeply care and love for his family, servants, advisers and his people. Aknamkanon would necessarily do anything to keep them from harm. Although he had good terms and relationship with his brother, Aknadin, there is sometimes a rift going on between them. The only thing precious to him in his lifetime is his son, Atem; despite being his heir, he seems to be very special and important to him in his heart. While upon his death, he is willing to sacrifice anything to ensure his son's safety, and promises to always be there by his side in spirit. 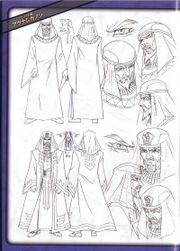 In Ancient Egypt, Aknamkanon was the previous Pharaoh with Shimon Muran and Akhenaden as advisers. He loved his country dearly and was (most likely) oblivious that his brother was secretly resentful and felt relatively unimportant. When Egypt was under attack, Akhenaden pushed to fight back and protect their people, but Aknamkanon refused on the grounds as he wanted peace. Eventually, the invading armies grew too close to the palace to be repelled, and Akhenaden suggested using a spell from the Millennium Spellbook to create the Millennium Items. Faced with the undeniable fact his kingdom may be destroyed, Aknamkanon agreed.

What Aknamkanon didn't know was that Akhenaden led a group of soldiers to the village of Kul Elna, where he ordered the thieves there killed, and their blood collected for the ritual to create the items (in the English anime, the souls of the thieves are collected, although it is indirectly implied they are still killed or cease to exist physically; but their spirits still haunts in their village despite it's destruction), unknowingly leaving one survivor of this slaughter. The slaughter was so horrific that Akhenaden never told Aknamkanon of it, and had all the soldiers he had taken brainwashed so as to forget the incident. Upon the invading army's attack a week later, Aknamkanon, along with Shimon, Akhenaden, and four other priests used the Millennium Items to defeat the army.

Sometime later, Aknamkanon finds out about the massacre from Priest Mahado, who learned the secret from the Millennium Ring, he sacrifices himself to the gods of Egypt as a penance in a state of guilt and shame believing that it was his own choice of option for allowing this to occur, asking only for his son's safety from their wrath in return. After the disturbing discovery, Aknamkanon grew ill and died. 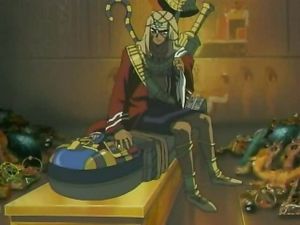 Years later, Thief King Bakura carries Aknamkanon's sarcophagus in front of Pharaoh Atem (Aknamkanon's son) and his Guardians and places the blames on the late Aknamkanon for killing his village to make the Millennium Items (although it was actually Akhenaden that was responsible). Aknamkanon (through his corpse) speaks with Atem with the instructions "Justice is in the name of the Gods" or "Justice lies with the Egyptian Gods". His next appearance is in the village of Kul Elna, where Aknamkanon's spirit protects Atem from the vengeful spirits of those who were slain in Kul Elna village and will lead those spirits to the realm of shadows where they belong despite being trapped there as well. Later, Aknamkanon's spirit again tells Atem the instructions "Justice is in the name of the Gods" is the key to defeating Zorc Necrophades. After the Battle Ritual, Akhenamkhanen is seen waiting for his son as he passes into the door between life and death along with the other guardians.

In the dub, Mr. Stein mentions, while dueling Jaden, that Aknamkanon was beloved by everybody, in the end of Early Dynastic Period.[1]