From Yugipedia
Jump to: navigation, search
This article is about the character. For the cards, see "The Fang of Critias" and "Legendary Knight Critias".

Critias is a character in the Yu-Gi-Oh! anime. He is a legendary knight from Atlantis, who aided Ironheart in the Battle of Atlantis.

Critias, like other legendary knights, is named after one of Plato's dialogues, which are the source of many of the rumors pertaining to Atlantis.

In his human form, Critias wears blue armor. Like the other knights he bears a similar facial expression to his chosen duelist, Seto Kaiba.

In his dragon form, Critias is a dark shade of blue.

Critias has a Duel Monsters card form. The card, "Fang of Critias", along with its counterparts "Eye of Timaeus" and "Claw of Hermos" are unlike other cards. They have their own set of rules and are color coded blue. They are Spell Cards that can combine with other cards. Critias can combine with Trap Cards to form Monster Cards. It has been shown to combine with three such cards, "Crush Card Virus", "Tyrant Wing" and "Mirror Force", forming "Doom Virus Dragon", "Tyrant Burst Dragon" and "Mirror Force Dragon" respectively. "Tyrant Burst Dragon" further combined with "Blue-Eyes White Dragon" into "Blue-Eyes Tyrant Dragon".

Critias and the other legendary knights, Timaeus and Hermos resided in the Spirit's World, until Atlantis became corrupt by the Orichalcos. Ironheart summoned them to the human world, to help him defeat Dartz, who was trying to wipe out the population of Atlantis and start fresh. However, Dartz weakened the knights by turning them into dragons.

The Legendary Dragons fought alongside rebels from Atlantis and more Duel Spirits, against Dartz, Orichalcos Soldiers and The Great Leviathan.

The battle ended with neither side victorious and Atlantis sunk to the bottom of the sea. The Dragons were sealed in crystal prisons, until they would be needed again. 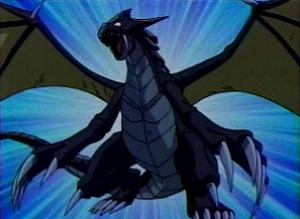 Critias in his dragon form.

Seto Kaiba was chosen as a Legendary Duelist to wield Critias. During his Duel with Alister, he was subconsciously taken to the Duel Monsters Spirit World, where he saw Critias trapped in his prison. By removing a sword he set Critias free and got the card "Fang of Critias", so that he may Summon "Critias" while playing Duel Monsters.

As a card, Critias had the ability to combine itself with Trap Cards. Kaiba used it to make use of his "Crush Card Virus", which Alister had prevented him from using with "Royal Decree". He used it in his second Duel against Alister to Summon "Tyrant Burst Dragon" then "Blue-Eyes Tyrant Dragon".

When Yugi and Kaiba faces Dartz, Kaiba combined "Fang of Critias" with Yugi's "Mirror Force" to Summon "Mirror Force Dragon". Yugi later used "Legend of Heart" to change the dragons back to their true forms. Together with Timaeus and Hermos, Yugi was able to defeat Dartz's "Divine Serpent Geh" and win the Duel.

However, The Great Leviathan was Summoned again. Critias took part in the battle against it, this time his side emerged victorious. He, Timaeus, Hermos and Dark Magician Girl appeared on the beach to thank Yugi before returning to the spirit world.