The jersey man (ジャージ男 jāji otoko) is a character appearing in the Yu-Gi-Oh! anime. The jersey man was a sexual predator, who attempted to extort Téa Gardner. In the English dub, his role is changed to a mugger. His role is partly based on the escaped prisoner from the manga. The name "jersey man" is used in the Japanese ending credits and is derived from the sports outfit he wore.

The original and edited versions, with and without the video camera

The jersey man took a photo of Téa Gardner working at Burgerpalooza. Since having part time jobs was against school rules, he used it to blackmail her. He left a copy of the photo in Téa's locker along with a note saying "Meet me in the gym's storage room after school. If you don't I'll reveal your secret." Téa suspected it was Joey Wheeler or Yugi Muto, since they knew she worked there, and went to the storage room to confront them. However the jersey man appeared with a video camera and recorded shots of her thighs and bust. He ordered her to stay quiet and do as he said, or the school would find out about her job, resulting in her expulsion.

(In the English dub, he pretended the note was from Yugi and it read "Téa we found a space in the old warehouse on Spring Street that you could use for a dance studio. Meet us there after school." The photo was replaced with a picture of ballet shoes. When Téa arrived at the location, but could not see Yugi or Joey, she began to suspect they were playing a joke on her. The jersey man confronted her, but did not have a camera. Instead, he demanded that she hand over all the money in her purse.)

Yugi Muto entered the storage room and attempted to fight off the jersey man, but was thrown into a gym horse, knocking him unconscious. Téa then grabbed the man by the arm and bit him, but was pushed away and also knocking her out. While the jersey man, filmed Téa sitting unconscious, Yugi switched to Yami Yugi and challenged the man to a game. (Shots of him filming Téa were removed in the English version.) 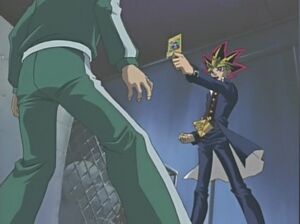 The rules of the game were that each player would draw a card from Yugi's Duel Monsters Deck. Whoever drew the weaker card would lose and be sent to the World of Darkness. (In the English version, Yugi said "If you win, you go free, but if you lose, I will decide your fate.") The jersey man did not take him seriously, but drew a card when Yami asked if he was afraid. He drew "Curse of Dragon", which was weaker than the "Dark Magician" that Yami drew afterwards. However the man laughed and said that it was just a game, whereas men determine winners based on strength. He prepared to punch Yami, but was rendered motionless as Yami inflicted the Mind Crush Penalty Game on him. Téa regained consciousness as Yami told the jersey man to repent for what he has done by living in a nightmare. (In the English version, Yami's dialogue was changed to asking Téa if she was okay.)

Téa recalled this incident during Duelist Kingdom, while noting how it seemed like Yugi was two people. Yugi did not remember what happened, just that when regained his senses the man was unconscious. Responding to Téa's comments he admitted that he thought he sometimes transforms into a different version of himself, but Téa said not to worry about it, that he would always be Yugi. (In the English version, Téa said "Well whatever's going on with you, both of you are really good guys. Trust me.")