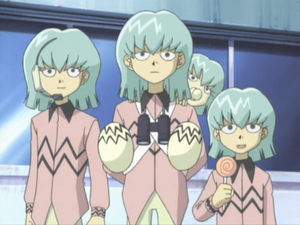 The brothers of Espa Roba are four characters in the Yu-Gi-Oh! anime.

During the Battle City tournament, the brothers helped Espa cheat by spying on his opponents and telling him what cards they had, knowledge which Espa accredited to acquiring due to extrasensory perception.[1]