From Yugipedia
Jump to: navigation, search
"Big 5" redirects here. For the group as a whole, see The Big Five.

Leichter, known as Kogoro Daimon in the Japanese version, was a member of the Big Five. He was the former assistant to Gozaburo and later Seto Kaiba.

Leichter is tall and has brown hair and dark skin. Like the other members of The Big Five, he wears a business suit. In the Virtual World, he takes the appearance of Jinzo.

Leichter seems to be loyal, as he helped raise Seto Kaiba and always performed his appropriate duties as Kaiba's right-hand man. Although he may have only done this in the hope to gain more power. Leichter is more virtuous than the other Big Five members, as he was morally opposed to Seto Kaiba's deceitful schemes, while the other members often engaged in similar behaviour. Despite this, he says he doesn't believe in playing fair, when he went back on his word to return Tristan's body. He is also very polite.

In the English dub he speaks with a Southern US dialect. His voice is slightly more robotic when he is in his Jinzo form. He tends to address people as Mr. (surname).

Leichter worked as an assistant to Gozaburo Kaiba at KaibaCorp. In the Japanese version, he sold weapons to foreign countries. In the English dub, he helped raise Seto Kaiba and was next in line to run KaibaCorp, after Gozaburo.

On Seto's birthday, Gozaburo gives Seto a 2% share of KaibaCorp (10 million dollars in the dub). With only Leichter allowed to help him, Seto was tasked to return Gozaburo 100 times (10 times in the dub) the money Gozaburo lent him within a year's time or else he and Mokuba would be sent back to the orphanage. Seto got Leichter to use the money to buy 51% of a company and force them to buy it back at 5 times the price (10 times in the dub) by threatening to let the company go bankrupt and leave the employees jobless.

Leichter, along with 4 other KaibaCorp employees formed a group known as the Big Five. Seto convinces the Big Five that Gozaburo is mistreating them and he'll help restore them to their former power. The Big Five agree, and thus buy 49% of KaibaCorp. Combined with 2% that Gozaburo had previously given to Mokuba, the Big Five vote out Gozaburo and vote in Seto as the president of the company. However, Seto quickly backs out on their deal, stripping them of their power and leaving the Big Five little more than figureheads and consultants.

Furious over Kaiba's betrayal and taking his spot as successor to Gozaburo, Leichter and the Big Five strike a deal with the president of Industrial Illusions, Maximillion Pegasus, in an attempt to overthrow Seto. If Pegasus defeats Seto and Yugi Muto in Duels, then they will use their 49% to vote Pegasus into power of the company by kidnapping Mokuba Kaiba, who has been entrusted with the security codes to the two percent the Big Five need.

The Big Five later watch on their monitor the Duel between Yugi Moto and Maximilian Pegasus. The Big Five and Pegasus' plan fails, after Pegasus is defeated by Yugi. In the manga, Leichter and the rest of the Big Five were fired by Seto and are never seen again.

In the anime, the Big Five avoid being fired by making excuses and offering Seto his complete virtual reality game as a peace offering.

However, Kaiba is rescued by Mokuba, Yugi, Joey, and Mai Valentine. The Big Five reprogram the game and set "Mythic Dragon" as the final boss. However, it is defeated by Yugi and Kaiba's "Dragon Master Knight".

After losing in Legendary Heroes, the Big Five found themselves trapped in the virtual world, instead of Kaiba. Here they meet up with Noah Kaiba. Having Seto as a common enemy, they made plans for revenge.

During the Battle City tournament, Noah has the KaibaCorp blimp sucked into an undersea fortress, where the virtual world's main servers are. They force Seto and Mokuba Kaiba, along with Yugi and his friends into the virtual world again. Using an altered set of Duel Monsters rules, involving Deck Masters, the Big Five Duel their enemies in the hopes of stealing their bodies to escape the virtual reality. 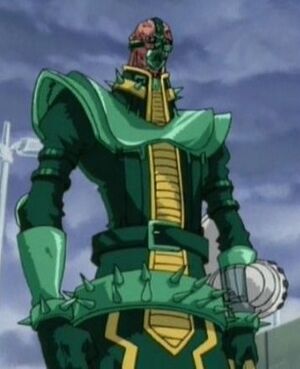 Leichter takes the form of "Jinzo", who he uses as his Deck Master and challenges Seto as his opponent. He claims that he did all the hard work to make Seto look good for Gozaburo and reveals Seto's manipulation of Mokuba when they overthrew Gozaburo, which Seto denies. Seto is originally unaware of Leichter's choice of Deck Master, due to his overcoat. He shows no interest in what it could be, until Leichter uses his ability to destroy Kaiba's Trap Cards. Seto manages to win the Duel after using "Blue-Eyes White Dragon" to destroy Leichter's "Satellite Cannon".

Leichter, along with Gansley, Crump, and Johnson, having failed to win their targets' bodies, go behind Noah's back and attempt to steal the bodies. They chase down Duke, Serenity, and Joey. As they argue over who gets which bodies, Noah makes contact and tells them off. Since Nezbitt didn't rightfully take Tristan Taylor's body (as he had actually lost the Duel despite defeating Tristan), Noah allows the Big Five to share Tristan's body in order to Duel Yugi. Should they win, they would get their freedom.

The Big Five face Yugi and Joey, using Tristan's body. The Big 5 each switch control and their Deck Masters throughout the Duel. Leichter does most of the turns during the Duel, using his Deck Master to negate their opponents' Traps and allow their own monsters to attack with "Gravity Bind" active. Leichter uses "Dragon Revival Ritual" to combine their Deck Masters into the Mythic Dragon, "Mythic Dragon" again. The dragon is destroyed by Yugi and Joey's "Mirage Knight", but the Big 5 use "A Deal with Dark Ruler" to make "Berserk Dragon" their Deck Master. However, it is destroyed by "Dark Magician Knight", costing them the Duel.

Noah refused to give the Big Five any more chances after that. In the original version, Noah deleted Leichter and the Big Five. In the dub, Noah imprisoned the Big Five in the different corners of the Virtual World until it was destroyed.

Leichter uses a Control Deck and utilizes a wide array of cards that lockdown the opponent's abilities, highlighted by his Deck Master "Jinzo". In his Duel with Kaiba, he combines "Jinzo" with "Injection Fairy Lily" and "Imperial Order", preventing Kaiba's use of Magic and Trap Cards and overwhelming him with the brute power of "Fairy Lily". He also uses a variety of cards to replenish his Life Points so he can continue to pay them to use the effects of "Imperial Order" and "Fairy Lily" effects. This deck may represent his desire to control Kaiba Corp and win money in a similar way he controls the duel and "wins" and "invests" Life Points.