Nezbitt, known as Soichiro Ota in the Japanese version, was an engineer and formally the chief technical officer at KaibaCorp who oversaw the company's research and development activities. He was in charge of Technical Engineering of the military weapons KaibaCorp originally made, and later the virtual reality Duel Monster system and video game software initiated by Seto Kaiba.

Nezbitt is tall and has brown hair. Like the other members of The Big Five, he wears a business suit. In the virtual world, he takes the appearance of Robotic Knight and later Perfect Machine King.

Nezbitt is a misanthrope who believes that machines are superior to humans. His fascination with machines is reflected in his deck and his choice of taking on the form of a Machine-type monster in the Virtual world. He also tries to behave like a robot in his speech. He is also extremely brutal, as seen when he takes over the duel against Yugi and Joey, palming Johnson by the face and shoving him aside.

In the 4Kids version, Nezbitt often speaks in a monotone tone with a robotic like dialect. In his "Robotic Knight"/"Perfect Machine King" forms, he has a computerized voice. He tends to do machine puns on his speech.

Nezbitt worked as at KaibaCorp, where he oversaw the military factories. Nezbitt, along with 4 other KaibaCorp employees, formed a group known as the Big Five.

Seto Kaiba, the adoptive son of the head of KaibaCorp, Gozaburo Kaiba, convinces the Big Five that Gozaburo is mistreating them and he'll help restore them to their former power. The Big Five agree, and thus buy 49% of KaibaCorp. Combined with 2% that Gozaburo had previously given to Seto for a test to prove his business skill, the Big Five vote out Gozaburo and vote in Seto as the president of the company.

However, Seto quickly backs out on their deal, stripping them of their power and leaving the Big Five little more than figureheads and consultants. Seto ordered Nezbitt to destroy his lab and had him build the Duel Tower in its place. Nezbitt was furious over his technological genius being used for games, and vowed revenge.

Furious over their betrayal, the Big Five strike a deal with the president of Industrial Illusions, Maximillion Pegasus in an attempt to overthrow Seto. If Pegasus defeats Seto and Yugi Muto in duels, then they will use their 49% to vote Pegasus into power of the company by kidnapping Mokuba Kaiba, who has been entrusted with the security codes to the two percent the Big Five need.

The Big Five later watches the duel between Yugi Moto and Maximillion Pegasus on the monitor. The Big Five and Pegasus' plan fails, after Pegasus is defeated by Yugi. In the manga, Nezbitt and the rest of the Big Five are fired by Seto and are never seen again.

However Kaiba is rescued by Mokuba, Yugi, Joey, and Mai Valentine. The Big Five reprogram the game and set the "Mythic Dragon" as the final boss. However it is defeated by Yugi and Kaiba's "Dragon Master Knight".

After losing in Legendary Heroes, the Big Five got trapped in the virtual world, instead of Kaiba. Here they meet up with Noah Kaiba. Having Seto as a common enemy, they made plans for revenge.

During the Battle City tournament, Noah has the KaibaCorp blimp sucked into an undersea fortress, where the virtual world's main servers are. They force Seto and Mokuba Kaiba, along with Yugi and his friends into the virtual world again. Using an altered set of Duel Monsters rules, involving Deck Masters, the Big Five duel their enemies in the hopes of stealing their bodies to escape the virtual reality. 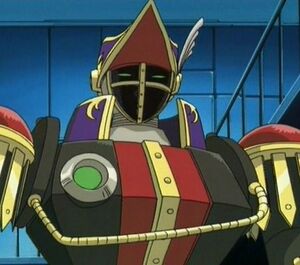 Nezbitt took the form of "Robotic Knight" to Duel Duke Devlin, Serenity Wheeler, and Tristan Taylor. He initially planned on dueling them 1 at a time, starting with Serenity, but Duke and Tristan talked him into a three-on-one Duel. Since Tristan and Serenity had little knowledge of Dueling, Nezbitt was sure he'd win easily.

With Nezbitt easily lowering Serenity's Life Points, as she doesn't know how to play, Tristan worries and uses his Deck Master to protect Serenity from an attack from Nezbitt. This causes Tristan to lose and Nezbitt has him ejected from the arena. 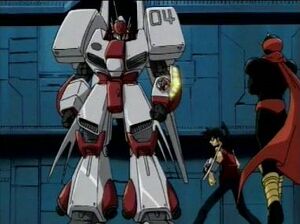 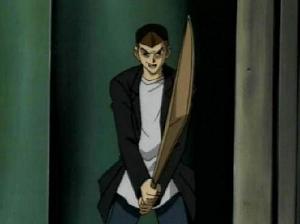 In this form, Nezbitt attacks Kaiba with a Bokken, but is attacked by robot Tristan. He kidnaps Mokuba, for Noah, and escapes on a motorcycle. Before leaving to the real word, the other members of the Big Five protest that Nezbitt didn't rightfully win Tristan's body, so Noah allows the five of them to share it in order to Duel Yugi Muto. Should they win, they would all get their freedom.

The Big Five face Yugi and Joey Wheeler, using Tristan's body. The 5, each switch control and Deck Master throughout the Duel. Nezbitt only takes full control for 1 turn, where he uses "Heavy Storm" to destroy Yugi's "Mirror Force", unknowingly raising the ATK of "Des Volstgalph" in the process, he then attacks "Des Volstgalph" with "Machine King", only to have "Machine King" destroyed. Towards the end of the Duel, the Big Five uses "Dragon Revival Ritual" to combine their Deck Masters into the "Mythic Dragon" again. The dragon is destroyed by Yugi and Joey's "Mirage Knight", but the Big 5 use "A Deal with Dark Ruler" to make "Berserk Dragon" their Deck Master. Ultimately, it is destroyed by "Dark Magician Knight", costing them the Duel.

Noah refused to give the Big Five any more chances after that. In the Japanese version, Noah deleted Nezbitt and the other members of the Big Five. In the dub, Noah imprisoned the Big Five in the different corners of the Virtual World until it was destroyed.

While Nezbitt does not return after being destroyed by Noah, he is seen accompanying "Gozaburo Kaiba" in Alister's flashback. Since it is later revealed that the man who Alister saw was Dartz pretending to be Kaiba, it is unclear if Nezbitt was actually present or just another illusion.

Nezbitt uses a Machine Deck centering on "Machine King" and its evolved form "Perfect Machine King". Nezbitt combines "Clockwork Night" with "Short Circuit", transforming all enemy monsters into Machine-Types and forcing them into Attack position, the transformation of the monsters to Machines further strengthening his "Machine King". Nezbitt also makes use of his Deck Master, "Robotic Knight's" special ability Final Artillery, which lets him discard his other Machine monsters to inflict 500 damage to his opponent.