Hasan is a mysterious ancient being in the Yu-Gi-Oh! anime and is the messenger of the Egyptian Pharaohs. For centuries he has defended the honor of Egypt's Kings, and he made a vow with Atem's father Aknamkanon to protect his son no matter what. 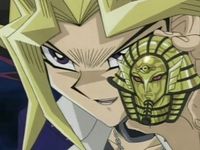 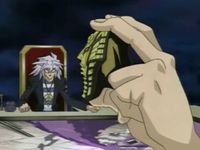 In Dawn of the Duel, he was Yami Yugi's "master item" during the Dark RPG against Yami Bakura. Hasan appeared before Atem, after he had fallen into a chasm. He advised him to rest, and left. Later, when Aknadin became the Great Shadow Magus, he intercepted one of his attacks and redirected it to Yami Bakura's Hourglass Token that froze time, thus destroying it and making time move again. He later perished at the hands of Zorc Necrophades, protecting the Pharaoh and his guards. Shadi later possessed his body, and died again.