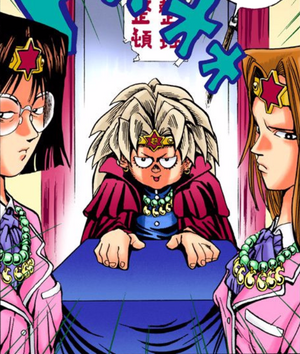 They are girls who accompanied Kokurano, while he performed public psychic readings. Similar to Kokurano, they wore beaded necklaces and headbands with six-pointed stars (five-pointed in the Toei anime).

In the manga there are two girls.[1] In the Toei anime, there is a much larger crowd. Only the two based on the ones from the manga have speaking roles and are voiced by Emi Uwagawa and Maki Yagita.[2]

The groupies were present when Katsuya Jonouchi attended one of Kokurano's services. One of them scolded Jonouchi for making noise and said that his negative energy was interfering with Kokurano's concentration. After Kokurano seemed to have predicted an earthquake, she asked the room for a round of applause. She also told Yugi Mutou off when he was skeptical of Kokurano's powers.[1]

Kokurano grew bored of the groupies and hoped to seduce Anzu Mazaki to replace them.[1] 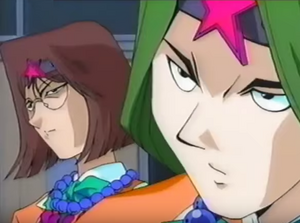 Kokurano's groupies, in the Toei anime

Kokurano had a large crowd of groupies. While walking down the hall, they insisted that other students clear the way to make room for him. In his later appearances, he is just accompanied by the group's two leading girls.[2]

During one of Kokurano's services, one of the groupies scolded Katsuya Jonouchi for making noise and said that his negative energy was interfering with Kokurano's concentration. Another asked if Kokurano was okay after an earthquake struck. The first asked the room for a round of applause, after Kokurano claimed to have predicted the earthquake that morning.[2]

Two groupies accompanied Kokurano when he sought Anzu Mazaki to try and tell her her future. One of them got annoyed when Anzu said she did not believe in such things. As the groupies discussed the fact that there were people who doubted Kokurano's powers, Kokurano told them not to worry, they would soon know his powers.[2]

The two were flustered, unsure what to do when Miho Nosaka playfully poked at Kokurano's cloak, asking what was underneath, much to his annoyance.[2]

When Yugi Mutou accused Kokurano of being a fraud, the groupies also scolded him for doubting Kokurano's powers.[2]