Dark Marik is a character appearing in the Yu-Gi-Oh! manga. This is the original depiction of Yami Marik, the split personality of the original Marik Ishtar. 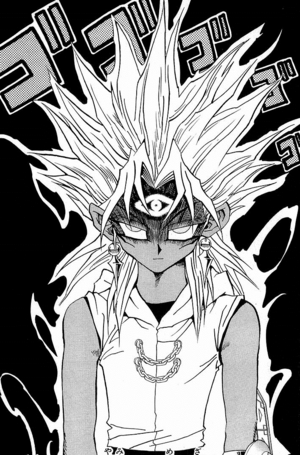 Dark Mariks appearance upon his debut.

Upon first awakening, he was wearing the original outfit of Marik including a light purple sleeveless hoodie, a black tanktop underneath that, beige pants, and black shoes. Later, before his Duel with Mai Kujaku, he removes the hoodie and wears a long purple cape over his shirt. He wears golden earrings, neckwear, armbands and bracelets. His hair is spiked upwards and points in all directions, though he retains the same wing-like fringes of Marik's hair, and he bears the Eye of Wdjat on his forehead. In the Battle City arc he wears a KaibaCorp Duel Disk on his left arm. As he is merely a split personality of the normal Marik, unlike Dark Yugi and Dark Bakura, who are both entirely different entities from their associated hosts in their own right, Dark Marik's facial structure is exactly the same as Marik's, though the similarities are offset by the differences outlined above. 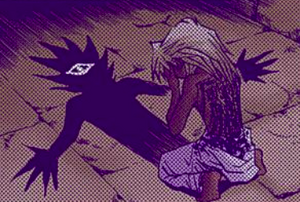 Dark Marik was "born" from the pain that Marik had endured when he was forced to take the initiation ritual to become a full Tomb Guardian at ten years old by his father. A year later, Dark Marik emerged for the first time after Marik's forbidden trip to the surface, thanks to his father's torture of Rishid. Thanking his father, he resisted his father's punishment and claimed the Millennium Rod for himself. Ignoring his father's orders to put the Item down, Dark Marik used its powers to smash him against the wall. When his sister Ishizu protested, she was frozen by the Rod's power. Dark Marik then proceeded to murder his father, skinning his father's back with the Rod's blade and then throwing the skin from his father's back onto Rishid, mocking him for wanting to be a part of the Tomb Guardians. Unfortunately for Dark Marik, Rishid had survived, calming Marik down and surpressing Dark Marik. Despite being sealed, Dark Marik later implied that he was somewhat responsible for Marik's crimes later in life, claiming that he took away Marik's guilt.

Dark Marik was released during the Battle City quarter-finals when Rishid was rendered unconscious during his Duel against Katsuya Jonouchi. Deciding Marik's Deck was weak, he changed it to add many new cards of his own, and discovered "The Sun Dragon Ra's" hidden powers. Unwilling to risk letting Rishid wake up, he attempted to murder him, but changed his mind after he heard that he was Dueling next, deciding to let Rishid live a little longer. In Marik's quarter-final match, Dark Marik Duels Mai Kujaku in a Shadow Game. The specifics of the Game presented the injuries from their monsters also being applied to them through realistic illusions (though the pain was real). Mai traded blows with Dark Marik fairly equally, even taking "The Sun Dragon Ra". When she proceeded to Summon the Dragon, however, it was locked in Sphere Mode, and Mai was unable to release the God monster. Dark Marik proceeded to do so on his turn, remove Mai's last defenses with "Viser Des" and "Viser Shock." Before he could attack her with "Ra," Dark Yugi furiously ordered him to stop, asking what he wanted. Dark Marik replied that he had no needs, claiming that all he wanted was to destroy everything besides himself. He attacked with "Ra," though the attack did not kill Mai due to the intervention of Dark Yugi and Jonouchi. After winning, Dark Marik trapped Mai's soul, where she suffered as several brain insects slowly devoured her soft tissues, leaving her with little more than a day to live before the torture kills her. After this, Jonouchi is determined to Duel Dark Marik and save Mai no matter how high the cost. Dark Marik noted that his power grew with each soul he fed to the darkness.

He watched the Duel between Ishizu and Kaiba, having to supress Marik initially upon the surprise of seeing their sister. He believed that Ishizu had the Duel won easily, even though Kaiba had "The God of the Obelisk" out (which Dark Marik saw for the first time). As he began to leave, the Millennium Rod activated, and showed Kaiba a vision of Priest Seto's past, which convinced Kaiba to instead Summon "Blue-Eyes White Dragon" to win the Duel.

After the quarter-finals, Dark Marik attempted to kill Rishid again, but he was opposed by Dark Bakura, who had teamed up with the real Marik. The duo Dueled in a match not part of the tournament. Dark Bakura managed to discard "The Sun Dragon Ra" via "Multiple Destruction," and Summoned multiple monsters via "Puppet Master, Controller of the Dead," but Marik used "Monster Reborn" to bring "Ra" back and introduced its One Turn Kill ability, sacrificing all but 1 of his Life Points to raise the "Winged Dragon's" ATK to 3999, then attacked to win the Duel. Marik tormented Bakura telling him that he will be in the darkness soon but Bakura claimed to be the darkness itself and vowed revenge before disappearing. The real Marik sealed himself in Anzu Mazaki's body and Bakura avoided death for both himself and his host via the part of his soul he had sealed in the Millennium Puzzle. Dark Marik claimed the Millennium Ring as his trophy from defeating Dark Bakura after his disappearance into the darkness, deciding to enjoy taming the darkness, wearing the Ring around his neck for the remainder of the tournament, now possessing two Millennium Items. He returned to try and kill Rishid again, but Ishizu had been warned by Marik and moved Rishid.

The airship soon arrived at Alcatraz, where the Duel Tower that the finals and semi-finals would be held in was located. The match-ups for the semi-final would be decided by a four-way battle royal. Dark Marik did not really care who he would face, but eventually decided to match himself up against Yugi, having been waiting to kill him for so long. However, despite his disruptive tactics, both Kaiba and Jonouchi were intending to make sure that Dark Marik Dueled Jonouchi, and Dark Marik was the first to be eliminated, followed swiftly by Jonouchi.

When he Dueled Jonouchi during the semi-finals, he transformed the match into a Shadow Game, connecting the Duelists to their monsters so that they'd feel the pain their monsters did in the same way as his Shadow Game with Mai. He controlled the Duel with the effect of his "Helpoemer" in the Graveyard, which stole cards from Jonouchi's hand as Dark Marik's "Coffin Seller" Trap Card drained his Life Points, and "Viser Des," drained the attack points of Jonouchi's monsters. Jonouchi turned this against him by using "Question " to Summon his "Jinzo," crippling Dark Marik's strategy after it destroyed his Traps. Dark Marik Summoned "Lava Golem" to Jonouchi's field to eliminate "Jinzo," and he drained Joey of strength via the effects of his duplicated "Viser Des." Joey managed to gain the upper hand with "Gilford the Lightning" until Marik Summoned "Ra," revealing its third power of God Phoenix. However, Joey was still standing after its blast and Summoned "Gearfried the Iron Knight", a monster with enough power to win him the Duel. He attempted to attack Marik directly but collapsed from the Shadow Game and was unable to continue to claim victory. Dark Marik was horrified that he'd almost lost the Duel, gagging into his hands, though he recovered enough to gloat. Kaiba in turn claimed he knew how to defeat "Ra."

After he'd recovered, he went to watch Dark Yugi's Duel with Kaiba. He noted what had happened, though he planned to kill both of them whatever the outcome. He was intrigued when both Duelists Summoned their Egyptian God cards, and shocked when the Millennium Rod activated again after the Gods destroyed one another, showing Kaiba and Dark Yugi the memories of Priest Seto.

Dark Marik turned his Duel with Dark Yugi in the finals into a Shadow Game that gave him a clear edge; when Dark Yugi lost Life Points, Yugi Mutou's body would fade away, and when Dark Marik lost Life Points, the original Marik would fade away. While Dark Marik would survive if Marik didn't, if Dark Yugi lost, both he and Yugi would be destroyed. Discarding "Ra" on his first turn, Dark Marik helped Yugi get "Slifer the Sky Dragon" out so he could destroy it himself with "Ra", which he succeeded in doing with God Phoenix. He reclaimed his "Monster Reborn," giving Dark Yugi a last chance to draw. Dark Yugi didn't even look at the card before he Set it, but Dark Marik wasn't interested. He brought out "Ra" again, this time using its One Turn Kill effect to raise its ATK and prepared to attack. He also revealed that he had taken the Millennium Ring from Dark Bakura, revealing that he was behind Bakura's disappearance to the group at large. When Dark Marik attacked, Dark Yugi revealed the card Kaiba had given him - "Devil's Sanctuary," which forced Dark Marik to attack himself. Dark Marik was forced to use the "De-Fusion" that Dark Yugi had given him through "Exchange," separating himself from "Ra" and boosting his Life Points.

Yugi then Summoned "The God of the Obelisk" and attacked Dark Marik directly, badly injuring him, but Dark Marik created a clone of it called "God Slime." He used the Slime to stall until he could revive "Ra" to destroy "Obelisk," with God Phoenix, but Dark Yugi prevented this by using "Slifer" as a shield. Dark Marik simply re-revived "Ra," and began to boost its ATK via One Turn Kill, only for Dark Yugi to sacrifice the "God Slime" to activate the effect of "Obelisk," boosting it to infinite ATK. Thanks to "Ra" being higher on the Divine Hierachy, Dark Marik blocked the attack, and prepared to finish Dark Yugi off, attacking "Obelisk." Dark Yugi responded with "Dimension Magic," that would destroy "Ra." Dark Marik, knowing that Dark Yugi didn't want to destroy the original, taunted him, claiming that Marik wouldn't survive the shock even with a single Life Point left. By this time, Rishid had woken up and made Marik realize that he had to accept his responsibility for being a Tomb Guardian and the death of his father. With this confidence, Marik overpowered his evil self and urged Dark Yugi to attack him. Dark Yugi did so, destroying "Ra." The shock of the monster's destruction while Dark Marik was fused to it allowed Marik to retake control, putting Dark Marik in the position of the sacrifice. Dark Marik begged his other self to work with him, but his efforts were in vain. Marik forfeited, reducing his Life Points to zero and destroying Dark Marik.