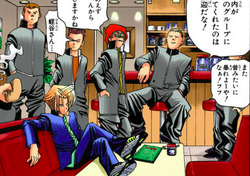 Hirutani's gang is a group of thugs, led by Hirutani himself. The gang is known for picking on weaker people, incapable of defending themselves. It consists mainly of people from Rintama High School, but has been around since Hirutani was in middle school.[1]

When they were in middle school, Jonouchi hung out with Hirutani and would spend time picking fights. During this time, he learned how to fight.[1] Jonouchi was considered to be partners with Hirutani.[2]

Hirutani blackmailed Jonouchi in returning, by threatening to beat-up the rest of Jonouchi's class. Jonouchi complied and joined the gang, which consisted entirely of Rintama High boys, apart from himself.[1]

As Hirutani forced Jonouchi to miss days of school, Yugi Mutou, Hiroto Honda and Anzu Mazaki grew worried and went to Jonouchi's house to check-up on him. Jonouchi's father, however, scared them away, mistaking them for Jonouchi and yelling at him for disappearing for two days.[1]

While Jonouchi was with the gang, they started a fight outside the American Club with a man who accidentally stepped on one of the member's foot. Yugi, Honda and Anzu spotted Jonouchi with the gang here. Yugi ran over to ask Jonouchi what was going. Jonouchi denied knowing Yugi, but as Yugi continued to plea with him, one of the members punched Yugi in the face.[1]

The gang left for the café, J'z. Inside Hirutani decided they should celebrate Jonouchi's return, but Jonouchi picked a fight with the guy who punched Yugi earlier. Hirutani ordered the rest of the gang to seize Jonouchi.[1] After they managed to pin Jonouchi they took him to the "torture chamber".[2]

Yugi, Honda and Anzu had followed the gang to J'z. After seeing one of the members leave, Honda seized him and demanded to know why Jonouchi was with them.[1] Honda went inside expecting a fight, but only found the boy, who punched Yugi earlier, lying unconscious. Honda was unable to wake him to get answers. Outside, he Yugi and Anzu split-up to look for Jonouchi.[2]

At the torture chamber, the gang tied Jonouchi's hands over his head and proceeded to attack him with stun-guns. Jonouchi managed to kickone of the thugs away, knocking him unconscious. The group still managed to electrocute him, until he could take no more. Hirutani ordered one of the gangsters to shock Jonouchi again. Although the gangster was concerned that it may kill him, he reluctantly proceeded to follow through, but Dark Yugi appeared and interrupted.[2]

Dark Yugi let the gang, punch him around for a bit, allowing him to set up a trap; He lured them into a puddle, as he stood up, he secretly put a metal bar under the unconscious member's arm. He then hung the Millennium Puzzle off a chain over the unconscious boy's forehead. He then challenged the gang to a game. He warned them that there was a time bomb under their feet and it would explode taking them with it if they couldn't find the switch in time. Hirutani mistook the stun guns they were holding as the switch as using them in the rain over the puddle would cause the gang to electrocute themselves. As the gang advanced to attack Yugi without using the stun guns, rainwater trickled down the chain and off the tip of the Puzzle onto the unconscious member, waking him up. As he woke up, he moved his arm suspended under the metal bar, causing him to let the stun gun he was holding drop into the puddle of water electrocuting the gang.[2]

Honda and Anzu then rushed in and the three of them took Jonouchi away.[2]

At school, Nezumi reported that he'd been mugged by a group of people, who used yo-yos. Jonouchi agreed to help Nezumi get back at these thugs. So Nezumi led Yugi and Jonouchi to where he'd been mugged. Yugi recognized the place as the "torture chamber" Hirutani's gang used. The group were then ambushed by Hirutani's minions.[3]

Hirutani offered Jonouchi a chance to rejoin the gang as his second in command. Meanwhile, Nezumi revealed that he'd been working for Hirutani, as he helped a member of the gang hang Yugi from a hook, by the rope around his Millennium Puzzle, while the remaining minions held Jonouchi back with their yo-yos. Jonouchi refused to rejoin and made his way over to Yugi, while taking hard hits from the yo-yos. Despite taking several hard blows, he managed to help Yugi down. He then turned to Hirutani and said that the pain of the bruises is nothing compared to the pain of betraying his friend.[3]

A number of minions closed in on Yugi and Jonouchi, swinging their yo-yos. Jonouchi borrowed Yugi's Millennium Puzzle and swung it around by the rope. The thugs' yo-yos all got caught in the rope. Easily able to grab their yo-yos, Jonouchi hung the thugs from the hook, by their fingers, by tying their yo-yos to it.[4]

Jonouchi then returned the Puzzle to Yugi, allowing him to change into Dark Yugi. Yugi and Jonouchi split-up, with Jounouchi facing Hirutani, while Yugi took care of the rest of the gang.[4]

Yugi led his faction to a rooftop. He took out his own yo-yo and began running around the group, using the yo-yo to knock holes in the galvanized rooftop. The thugs continued to hit theirs off the rooftop too, causing it to collapse below them.[4]

On another rooftop, Hirutani and Jonouchi had a fistfight, but Hirutani smashed some glass and threw it in Jonouchi's eyes. Hirutani approached Jonouchi with another shard of glass to stab him. Although unable to see Hirutani, Jonouchi heard him step on glass and delivered a massive punch. Hirutani was left dangling off the edge of the building by one hand. Jonouchi then took out his own yo-yo and used the walk the dog technique to hit Hirutani's hand, causing him to fall.[4]

The yo-yo gang appeared once in the Toei anime. This was an amalgamation of both their manga appearances.[5]

Many events were the same as the first manga appearance, up to Yugi Mutou, Hiroto Honda and Anzu Mazaki searching for Jonouchi after the gang went to J'z. Honda and Yugi confronted Hirutani. However Hirutani's spiked yo-yo, easily tore apart Honda's brush and struck both boys down.[5]

Yugi's hands were tied over his head onto the crane. Jonouchi freed him and the two boys split-up and defeated the rest of the gang in the same manner as the second manga appearance.[5]