Jonouchi and Dark Yugi battle Hirutani and his yo-yo-wielding gang. 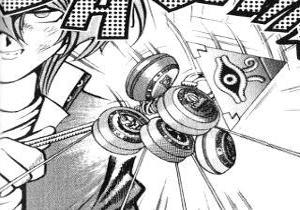 Jonouchi catches the yo-yos with the Millennium Puzzle.

For trying to strangle Yugi with his own Millennium Puzzle, Jonouchi warns Hirutani that he has made him mad. Hirutani laughs that Jonouchi should look at where he is now, before making big talk. With a number of gangsters swinging yo-yos at Yugi and Jonouchi, Hirutani says that even Jonouchi should be able to see that he is in a no win situation. One of the gangsters laughs that they are going to "walk the dog" on their dead bodies.

With too many thugs and nowhere to run, Jonouchi thinks that this is bad. Hirutani gives Jonouchi one more chance to join the gang if he wants to live. Yugi objects that Jonouchi will never join the gang, regardless of how much Hirutani threatens him. Jonouchi agrees and says that that is what a real friend would say. 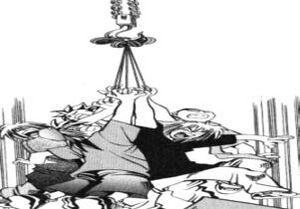 The gangsters are hung from the hook by their yo-yos.

Hirutani gives his gang the order to kill Jonouchi and Yugi. Jonouchi tells Yugi to stay back and gets an idea from looking at the Millennium Puzzle. He asks for a loan of the Puzzle and Yugi hands it over, curious as to what he is about to do. Jonouchi asks the thugs to bring it on and starts swinging the Puzzle around by holding the far end of the rope. This causes all the yo-yos to get caught in the rope. Jonouchi grabs onto the yo-yos and removes the Puzzle. With that, he ties them to the hook hanging from the ceiling and raises it up, leaving the thugs dangling by their fingers. The five gangsters wail in pain, while Jonouchi laughs that that is "Human hanging yo-yo tech".

Jonouchi returns the Puzzle to Yugi, who switches to Dark Yugi. Jonouchi is slightly surprised, not being used to seeing Yugi change. Dark Yugi says that it's payback time and that Jonouchi should take Hirutani, while he handles the rest of the gang.

Hirutani orders his minions not to let Yugi and Jonouchi leave here alive. Hirutani and the five of them chase Yugi and Jonouchi upstairs, where they find they've disappeared. One of them spots Yugi out on the galvanized roof through the broken windows. The gang come out and corner him, teasing him for letting himself get surrounded. However Yugi pulls out a yo-yo and spins it around quickly, impressing them. He catches the yo-yo back in his hand and says "Let's start the game". The rules are simple, he explains, last one standing on the roof wins.

The thugs start to close in on Yugi, but Jonouchi who is standing behind them calls Hirutani over and suggests that they end this for once and for all. Hirutani laughs that he has heard Jonouchi say that before back in middle school at the start of their friendship. He reminds Jonouchi how they used to fight, until both of them were on the ground and neither of them won. Jonouchi says that that was before Hirutani was screwed-up in the head and today he won't be holding back. The two run at each other and Hirutani swings a punch at Jonouchi. However he dodges it and gets ready to hit Hirutani back. 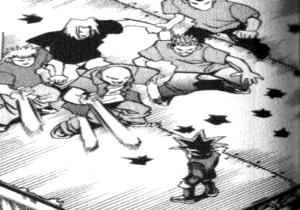 The gangsters corner Yugi by stepping inside the ring of holes he made.

The remainder of the gang are swinging their yo-yos at Yugi. Yugi starts to swing his yo-yo at the roof below him, smashing holes in it. He runs around in a circle making these holes and stops at the corner of the roof, where the gangsters close in on him. 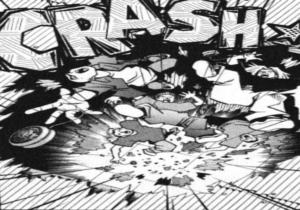 The gangsters fall through the hole.

They menacingly laugh that he has fallen into their trap and say he has a choice; Either let them hit him in the face with their yo-yos or jump off the edge. However Yugi grins and claims that they are the ones who have fallen into the trap. He explains that the rusty old roof that they're standing on was weak enough to be easily broken by a yo-yo. With the thugs now standing inside the circle of holes he made, he asks how long they think it will hold their weight. The roof begins to warp and the gangsters panic. Yugi announces that you don't aim yo-yos at people, you aim them at the ground and suggests that they think about that in the hospital. The gangsters portion of the roof gives away and they fall through. 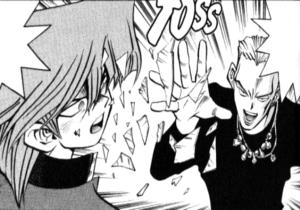 Jonouchi and Hirutani continue their fight. Jonouchi manages to punch Hirutani in the face, knocking out a tooth. Jonouchi asks Hirutani what's the matter and guesses he's gone flabby. He jokes that it must be easy on top of "Monkey Mountain". As Hirutani steps back to recover he gets an idea from looking at the broken window. He takes a shard of the broken glass and hits it, causing it to break into pieces. He then tosses the pieces of glass into Jonouchi's face.

With glass in his eyes, Jonouchi is unable to see. Hirutani laughs that unlike Jonouchi, he has gotten smarter. He punches Jonouchi, who is still trying to get the glass out of his eyes. Hirutani collects another shard of glass and prepares to plant it into Jonouchi's neck as a victory flag. Jonouchi wonders where Hirutani went and starts to listen. He hears crunching noises as Hirutani steps on broken glass. From this, Jonouchi is able to figure out his location. As Hirutani sneaks up, Jonouchi quickly turns around and punches him in the face. Hirutani is knocked back is slides off the edge of the roof, leaving him hanging over the edge by one hand. 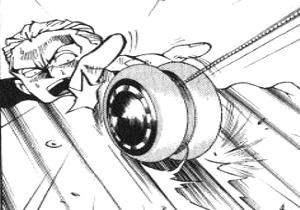 Jonouchi uses his yo-yo to knock Hirutani off the edge.

Jonouchi's eyes start to recover and he walks over to Hirutani. He takes out his yo-yo and asks if Hirutani wants to see his yo-yo tech. He rolls the yo-yo on the ground, demonstrating his "parade the pooch" or "walk the dog". The yo-yo hits Hirutani in the hand, causing him to lose his grip and fall. Jonouchi rolls the yo-yo back up to his hand. he confesses that that is the only trick he knows; He's still practicing the others.

Dark Yugi comes over, relieved that Jonouchi is okay. They wonder where Nezumi went and Jonouchi vows to kick his butt, when he finds him. As they leave Jonouchi apologizes for getting Yugi caught up in his problems, but Yugi insists that Jonouchi's problems are his problems too.

Episode 9 "Explosion - Ultimate Yo-Yo Technique" of the Toei anime is based on the story from this chapter and the previous amalgamated with the one from chapters 11 and 12.