"Shooting Stardust" is the twenty-ninth chapter of the Yu-Gi-Oh! manga.

Yugi, Jonouchi and Honda brace themselves for the shootout. Johnny Gayle, Bob McGuire and "name unknown", stand at the other side of the battlefield, confident that they will win.

The floor tiles light up as screens. An image of a woman welcoming them to Kaiba information appears. The screen then switches to Kaiba, who greets Yugi and informs him, Jonouchi and Honda that the enemies they will be facing are mercenaries, who he has hired especially for this game. If Yugi and his friends are lucky, Kaiba says that they shall die in a blaze of glory, like a shooting star across the sky. Jonouchi yells at Kaiba that his games suck and they are going to make it right to the top. Yugi vows to challenge Kaiba again, with his grandfather's cards when they get there.

Kaiba smirks and in his head recollects that Yugi has been given toy guns, while the mercenaries have real lasers, which can cause a one million volt shock, should they hit a sensor in a life vest. Kaiba says to enjoy their last game and the screen goes blank.

Jonouchi tells everyone to concentrate. Kaiba will do anything to win, so the enemy will be tough, Yugi warns. Honda isn't too worried. He is an ace with model guns, he tells them and claims to have been able to hit a ¥100 coin with a BB gun from 50 feet, when he was a kid. The game starts and Yugi, Jonouchi and Honda hide behind one wall.

Name unknown asks how they should deal with these kids. Being the expert in guerrilla warfare, Gayle suggests that they leave it to him. He plans to pursue a surprise attack and finish them in an instant. With the opposition being amateurs, he predicts that they will be scared stiff when he jumps out in front of them. This game is nothing to someone with real combat experience he comments, before moving in. Gayle makes his way through the battlefield, while back at their starting post, McGuire accuses him of showing off and wanting the bounty all to himself.

Jonouchi leaps across the tops of the walls.

At the other team's post, Jonouchi cannot understand why they are waiting around, but Honda insists that they should stay still and wait for the mercenaries to make the first move. Honda thinks to himself; in tight quarters like these you only move forward when you have a secure good position; that is a basic survival technique. In his head, Yugi agrees with Honda, believing they should stay put and wait for the enemy to come to them. Jonouchi cannot stand sneaking around like this. A real man faces his enemy head on, he thinks. Unable to take it anymore, he hops up on top of the wall much to his teammates' disgust.

With a clear view of the battlefield, Jonouchi races across the tops of the walls, until he spots Gayle crawling below him. Jonouchi shouts that he has found one and Gayle looks up in shock, astonished that Jonouchi thought up an attack even more surprising than his. 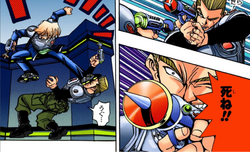 Jonouchi readies his gun, but Gayle being the one with weapon training is able to aim his gun much quicker. However Jonouchi decides not to use the gun and leaps down, kicking Gayle in the face. Gayle calls him "Kamikaze boy" and Jonouchi smiles, saying that his way is much faster.

Yugi is thrilled that Jonouchi managed to take one out, while Honda is totally stunned. The other mercenaries are surprised and start shooting at Jonouchi.

Jonouchi runs for cover. Now that the mercenaries have shown themselves and Jonouchi is acting as decoy, Honda takes the chance to finish them off. He sees McGuire and hits him dead on in the sensor. However, it has no effect.

Jonouchi makes it back to the Yugi and hides behind a wall. Yugi starts shooting back at the mercenaries too. A laser goes past Honda, skimming his shoulder. He feels a shock, although the guns are supposed to be non-lethal. Name unknown and McGuire move in closer to Yugi and Jonouchi. Honda calls over to his team mates, telling them that they have to pull back, as there is something wrong with the game. Jonouchi is not happy with the idea of running. 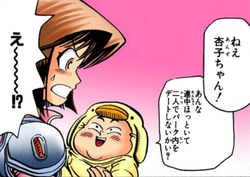 Back in the station, Anzu is watching them on a monitor, impressed that they have beaten one of the enemies. Johji calls her "Anzu baby" and suggests that they ditch the others and go on a date in the park. Anzu is flabbergasted and comments that Johji is mature for a baby and asks what his name was again. He tells her that it is Johji and that there is a pretty good milk stand in the park.

Yugi, Honda and Jonouchi arrive back at the station. Jonouchi is annoyed about running, saying that it is not cool to show your back to the enemy. Anzu is surprised and tells them that they cannot leave in the middle of a game. Johji frowns, annoyed that the boys have interrupted his time with Anzu. Yugi asks Honda what is wrong. He replies that the game is rigged and hops his gun off the ground, calling the guns useless and says that there is no way that they can win. He curses Kaiba for playing such a dirty trick 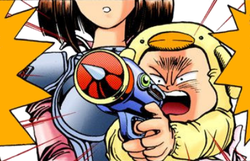 Enraged Johji takes Anzu's gun and aims it at the boys. He calls Honda a bully for interrupting his time with Anzu and talking bad about Kaiba. Not willing to let Honda get away with it, he starts firing lasers at the boys. The trio run for cover, while the blasts hit the extra vests on a rack behind them. One of the vests' sensors is hit, causing it to get electrocuted.

Everyone is surprised at the effect. Yugi realizes that they could have been hit with that same shock. Honda takes Anzu's gun from Johji and compares it to his. While the two guns look the same, they are built completely different. The mercenaries have guns just like Anzu's, Honda says. Jonouchi continues that Kaiba did not know Anzu was their friend when she was hired, which is why she was given one of the lethal guns. Seeing how Kaiba has set her friends up, Anzu announces that she is quitting her job. Yugi curses Kaiba and calls the game cowardly. 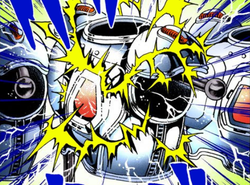 The spare vest gets electrocuted.

With one working gun, Honda thinks they should be able to take out the remaining two opponents, as Kaiba hadn't predicted this. With their opponent's being two professional shooters, Yugi asks what they can do with one gun. Jonouchi suggests that he do another surprise attack, but Honda quickly shoots down the idea, calling Jonouchi an idiot and saying that it was a miracle it worked the first time.

Johji tells the boys to shut up. Kaiba is the greatest player and they should stop saying bad things about him, he warns them, and says that he would like to shoot Honda with the gun. Honda looks at the sulking baby and gets an idea. 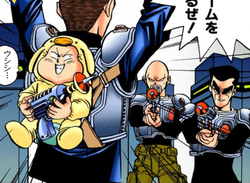 Johji hides on Honda's back.

Honda goes into the battlefield alone. Name unknown sees him and asks if is going to keep playing. Honda remains silent and the mercenaries aim their guns. McGuire laughs that he doesn't stand a chance, because it is two against one. Honda approaches them, drops his gun and raises his arms in surrender. The mercenaries start laughing, and name unknown says that Honda's surrender is no use. McGuire explains that that is because Kaiba has paid them to kill him. The mercenaries prepare to shoot. Johji, who is hidden on Honda's back tosses a gun to Honda, which he uses to take out both enemies, before they can get him.

The two fall to the ground as they are hit with an electric shock, while Honda smirks, asking if they ever watch westerns; the hero is always the one who says the least. Before leaving, he tells them not to worry, he turned down the voltage, so the shock won't kill them.

Yugi, Jonouchi and Anzu congratulate Honda. Johji reminds him that he helped out, so Honda's not to forget his promise. Honda begs Anzu to take a bath with Johji, much to her disgust. She refuses and runs away from him.

Kaiba sees that they have cleared the first stage and wonders how they will fare in the next one.

Episode 22 of the Toei anime, ""Tearing - Boarderline Shooting"" is partly based on this chapter.

A number of changes were made, including: