"Evil vs. Evil!", titled "Darkness VS Darkness!!" (！！ Yami Bāsasu Yami!!) in the Japanese version, is the 234th chapter of the Yu-Gi-Oh! manga. In its first English printing, it was numbered as the 175th chapter of Yu-Gi-Oh! Duelist. In the 3-in-1 edition, its number was changed to match the original Japanese printing.

Dark Marik faces off against Dark Bakura in a Shadow Game where the loser will be killed. Dark Bakura is wary of "The Sun Dragon Ra", but Marik has a plan to combat it, vowing to right the wrongs he committed by killing both halves of himself.

Dark Marik and Dark Bakura face off on top of the airship. Dark Marik reiterates that they'll play a Shadow Game, and that the loser will be obliterated. It's a Game of death, and Dark Bakura is the one who'll die, Dark Marik smirks. Dark Bakura smiles, telling Dark Marik to say what he wants before the darkness fills his mouth.

Dark Marik thinks to himself that if he remembers correctly, Bakura fell against Yugi's "Slifer", in the first of the four Duels. During the third Duel when Dark Marik crushed the girl, Dark Bakura's vessel was in the infirmary. In other words, Bakura never witnessed the power of Dark Marik's "The Sun Dragon Ra" firsthand. He's never seen the God card, and he won't know what hit him. But Dark Bakura laughs inwardly, thinking that Dark Marik is an idiot. Dark Marik's alter ego is Dark Bakura's partner. Marik's told Dark Bakura all about Dark Marik's God card and much more. It means he knows Marik's entire Deck. Dark Marik smirks, he knows the memory of his other self was implanted inside Dark Bakura, but Marik's Deck is weak. When their personalities changed, Dark Marik added many new cards of his own. And even if Dark Bakura knows the secrets of the God card, he has no way to resist it. He thinks that they should have fun coming up with a useless strategy.

Dark Marik suggests they start the Duel, but Dark Bakura tells him to hold on; Dark Marik's other half has something to say to him, and he irritably mutters that this is getting confusing. Dark Marik impatiently asks what, and Marik asks him if he is the evil self that Marik himself created. Dark Marik laughs, so what if he is? Anger, hatred, the darkness that built a nest in Marik's heart. And out of that darkness hatched Dark Marik, the embodiment of Marik's darkest desires. Marik muses that Rishid sealed Dark Marik away, and Dark Marik replies that even sealed away, he still helped Marik. He took away his guilt. Laughing, he comments that a "thank you" would be nice.

Marik then explains that in this state, he can communicate with the memories of other people who have been affected by the Millennium Rod. Anzu, the girl he brainwashed, just discovered something very interesting. His sister told him the secret of the Ishtars, the horrible truth that he could never accept - it was Dark Marik who killing his father. Dark Marik retorts that the two of them are two minds in one body, commenting that Marik shouldn't act like he isn't responsible, just because Dark Marik had the upper hand, and he calls Marik a "father-killer". Marik shakily admits that the tragedy came from his own heart, and he asks his father what he has done. Dark Bakura snidely apologizes, also calling Marik "father-killer". Marik states that five-years ago, the man he saw the day his father died, somehow Marik thought he was the one who was the resurrection of the Pharaoh's soul; Marik thought that the man killed Marik's father. Dark Bakura is in shock, having realized from Marik's description that he's talking about Shadi, and he thinks that it is impossible, as five years ago, he was already... Dark Marik asks Marik what "Mr. dominant half" is trying to say, and Marik replies that Dark Marik will pay for Marik's father's death. They're both guilty, so they'll both pay. Dark Marik laughs, telling them to do their worst.

Marik tells Bakura "let's go!" Dark Bakura snaps at him to be quiet; Marik isn't the boss of him. Marik protests that he can assist Dark Bakura in battle, but Dark Bakura replies that all Marik has to do is come through on their agreement. He'll defeat Marik's dark side and save the bald guy's life, in exchange for the Millennium Rod and the secret of the carvings on Marik's back. He angrily think that he thought putting all seven Millennium Items in the Tablet of the Pharaoh's Memories would give Dark Bakura the Shadow power, but there's some other requirement as well. Unless he decodes it, the door to "that place" won't open. He adds one more thing; as long as Dark Bakura wins, Marik doesn't care if his body is burned to ashes, right? Marik agrees, and Dark Bakura laughs. He's gald to hear it, now he can kill Dark Marik without worrying. Dark Marik retorts that he'll feed them both to the darkness. 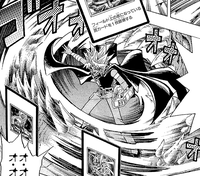 They both declare Shadow Duel, and darkness descends on the arena, blotting out the night sky. Dark Marik reminds Dark Bakura that this is a Shadow Game, and that the loser will be consumed, body and soul. It's the ultimate death Game. Dark Bakura muses on the words "body and soul consumed". Dark Marik grins, telling him to just wait and see. Drawing, Dark Bakura takes the first turn, and he laughs, thinking that he'll set a powerful trap in the first round. Dark Marik thinks that he knows all about Dark Bakura's Occult Deck. Dark Bakura asks Dark Marik if he's ready. He plays a face-down card, then he Summons "Goblin Zombie" in Attack Position, ending his turn. Dark Marik smiles, thinking that Dark Bakura understands, doesn't he? This kind of Shadow Game can only be fought by those chosen by the Millennium Items. Dark Marik draws, Setting a card and Summoning "Drillago" to do his bidding. The drill-covered monster attacks, and Dark Bakura laughs, activating his Trap Card, "Fearful Earthbound". He tells Dark Marik to take a look at his feet, and Dark Marik blanches and the head of s massive spirit emerges below him, with Dark Marik between its jaws. Dark Bakura explains that he used a monster with low ATK as a decoy to activate "Fearful Earthbound", and Dark Marik furiously realizes that he can't stop his monster's attack. As "Drillago" lunges for "Goblin Zombie", Dark Bakura thinks that Dark Marik can go ahead and defeat his decoy. It's weak, anyway. The more monsters Dark Marik sends to the Graveyard, the stronger Dark Bakura's Occult Deck becomes. "Goblin Zombie" is pierced by the drills and wiped out, activating the effect of Dark Bakura's Permanent Trap Card. The jaws of the spirit close - and Dark Marik snorts, apologizing for spoiling Dark Bakura's plans. Dark Marik activates his "Remove Trap" to wipe out the ghost, dispelling it in a tornado. Dark Bakura snorts, until Dark Marik tells him to take a look at himself. As Bakura's Life Points are reduced to 3500, his upper arm and shoulder disappear, much to his horror. Dark Marik laughs, commenting that it looks like Bakura was bitten. He lost some Life Points from Dark Marik's attack. In this Shadow Game, whenever one loses Life Points, the darkness eats their body away. Dark Bakura looks up, musing that hidden in that darkness is a beast that devours souls. He laughs, commenting that this is going to be fun. Dark Marik clarifies that those who lose all their Life Points are eaten by the void, body and soul. This is Dark Marik's death Game.

Duel continues in the next chapter...