From Yugipedia
Jump to: navigation, search
For the first subseries of the English manga, see Yu-Gi-Oh! (subseries).

Yu-Gi-Oh! is a manga series about games by Kazuki Takahashi, which the entire Yu-Gi-Oh! franchise originated from.

It was serialized in Shueisha's Weekly Shōnen Jump from September 14, 1996 to March 8, 2004. 343 chapters were published. These were reprinted in 38 volumes in the tankoban and 22 in the bunkoban.

The story was initially episodic, with a few exceptions. It focused on the adventures of Yugi Mutou, who would unknowingly become possessed by Dark Yugi and defeat bullies and evildoers in dangerous Shadow Games. The story later focuses more on the card game Duel Monsters as a plot device in two tournament arcs and stories spanning over many more chapters. In the final arc, Dark Yugi relives his past life as a Pharaoh through a role-playing game, the Shadow RPG.

The English version is subdivided into three series; Yu-Gi-Oh!, Yu-Gi-Oh! Duelist and Yu-Gi-Oh! Millennium World. A number of minor changes are made, but significantly less than in other English adaptations of Yu-Gi-Oh! media.

Yu-Gi-Oh! is one of the best-selling manga series of all time, with a total estimated circulation of approximately 1.38 billion copies in Weekly Shōnen Jump, and selling an estimated 40 million volumes.[1]

The series contains 343 chapters. Depending on the source, these chapters may be organized into six, seven, or nine arcs. There is also a special two-part chapter, "TRANSCEND GAME".

Yugi Mutou solves the Millennium Puzzle, causing him to share his body with the spirit Dark Yugi, initially without Yugi's knowledge. When Yugi and his friends are faced with bullies and evildoers, Dark Yugi will often take control and challenge the offenders to Shadow Games. Significant opponents include Seto Kaiba, who becomes a rival of Dark Yugi and Shadi, who sets up the Trial of the Mind Shadow Game to test if Yugi is worthy of the Millennium Puzzle.

Seto Kaiba sets up the Death-T theme park to try and kill the Yugis in vengeance for an earlier defeat. It is during Death-T, that Yugi becomes fully aware of Dark Yugi's existence.

Dark Yugi faces more villains, in a similar format to the School arc. The final opponent, being Dark Bakura, who possess the body of Yugi's friend Ryo Bakura through the Millennium Ring and faces Dark Yugi in a tabletop role-playing game, Monster World, where the souls of Yugi and his friends are trapped in the characters Dark Yugi uses.

Yugi is forced to take part in the Duelist Kingdom tournament, hosted by Maximillion J. Pegasus, the creator of Duel Monsters and owner of the Millennium Eye. Katsuya Jonouchi also takes part to win the prize money to save his sister, Shizuka Kawai from going blind.

Seto Kaiba hosts the Battle City tournament to try and acquire the three God cards. Dark Yugi takes part as a step towards regaining his lost memories from when he was a pharaoh. The Yugis are opposed by Marik Ishtar, a Tomb Guardian, who blames the pharaoh for the tragedy his family had to endure.

The final stages of the Battle City tournament take place in the Battle Ship and Duel Tower. The psychotic Dark Marik takes control of Marik's body.

Dark Yugi's quest to regain his memories is turned into a role-play game, by Dark Bakura, set in the World of Memories, where he relives his past life, including the battle with Zorc Necrophades.

Yugi and Dark Yugi, now aware of his real name, "Atem", face each other in a Duel to determine if Atem is ready to pass on to the afterlife.

A special two-part chapter serving as a prelude to the film Yu-Gi-Oh! The Dark Side of Dimensions. It shows Kaiba attempting to make contact with Atem.

The manga was first serialized in 343 chapters in Weekly Shōnen Jump in Japanese, between September 1996 and March 2004, with two special chapters, "TRANSCEND GAME", released in April 2016.

In English, Shonen Jump serialized the manga between 2002 and 2007, but skipped the chapters in the Duel Monsters-centered arcs. It printed chapters 1 to 59 under the title Yu-Gi-Oh! and chapters 279 to 343 under the title Yu-Gi-Oh! Millennium World, with numbering reset to 1 to 65. The English Weekly Shonen Jump published the "TRANSCEND GAME" special chapters in December 2016 and January 2017.

The manga has been serialized in magazines in other languages including German in Banzai! and Swedish in the Swedish Shonen Jump. 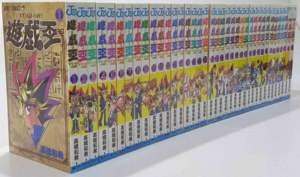 The manga in 38 tankōbon volumes

The manga was printed in 38 paperback books in Japanese, between March 1997 and June 2004. Some changes were made from when the manga was printed in Weekly Shōnen Jump, such as overlay text and logos being removed from title pages and color pages switched to black-and-white. Each volume contained a foreword with comments from Kazuki Takahashi. Volume 31 of the Japanese tankōbon came with a promotional card.

The French translation of the tankōbon was published by Kana between January 1999 and December 2005.

The English translation of the tankōbon was published between March 2003 and February 2008. It was split into three series; Yu-Gi-Oh! (volumes 1 to 7), Yu-Gi-Oh! Duelist (volumes 8 to 31, renumbered to 1 to 24) and Yu-Gi-Oh! Millennium World (volumes 25 to 38, renumbered as 1 to 7). Additionally, Duel 060, renumbered as Duel 001 of Yu-Gi-Oh! Duelist, was moved from the end of volume 7 to the beginning of Duelist volume 1. Some changes were made from when the magazine was printed in Shonen Jump, including changing the name of Magic & Wizards to Duel Monsters. Volumes featuring the Duel Monsters game included a "Master of the Cards" section which detailed cards that appeared in the volume. Two volumes of the English tankōbon came with promotional cards.

The Italian translation was published between October 2003 and July 2011. It split each of the first 6 volumes into two separate volumes, but did not split the other 32, making for a total of 44 volumes.

The manga has also been released in tankōbon format in other languages, including German, Portuguese and Thai.

The French version of the manga released a double edition, where each volume contained two of the tankōbon volumes, making a total of 19 volumes.

The French version of the manga released box sets, where each box contained four tankōbon volumes.

The manga in 22 bunkoban volumes

The Japanese series has been reprinted in bunkoban format, where the 343 chapters have been released in 22 volumes. Each volume contains an afterword by Kazuki Takahashi, a Yu-Gi-Oh! character version of a Tarot card from the Major Arcana and an explanation of the included Tarot cards.

A number of changes were made including correcting errors, censorship, adding scenes and adjusting early dialogue and scenes to better match later chapters in the series.

The bunkoban edition has also been made available in digital format, in both black-and-white and full-color.

The English series has been reprinted in a 3-in-1 format, with each volume collecting 3 volumes each of the original run. Since the tankōbon had 38 volumes, the 3-in-1 had 13 volumes, releasing the final one as a "2-in-1".

The magazine and tankōban printings of the English manga had previously split the series into three subseries—Yu-Gi-Oh!, Yu-Gi-Oh! Duelist and Yu-Gi-Oh! Millennium World—with numbering resetting to 1 at the beginning of each subseries. While the 3-in-1 edition maintains the subtitles "Duelist" and "Millennium World", it does not reset the numbering. Each chapter has the same number as it did in its Japanese printing.

The Japanese manga was reprinted in 13 volumes, beginning April 2016, as a Shueisha Jump Remix. They were printed on lower quality paper, allowing them to be sold cheaply. Volumes varies in length and are priced proportionately.

In the English translation, some changes that are made include: