He wanted Ryuji to avenge and succeed him. However, when Ryuji failed, Mr. Otogi revealed that Ryuji was born only to avenge him, and that failure meant that the boy had no more reason to live. 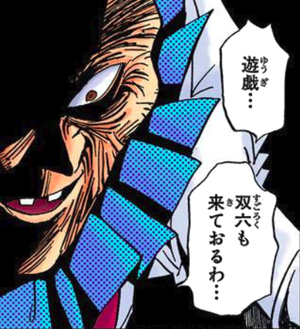 Mr Otogi's face, after losing in the Devil's Board Game against Sugoroku.

Mr. Otogi asked Sugoroku Mutou, a master gamer, to take him in as a disciple. After a while, they challenged each other for the ownership of the Millennium Puzzle in a Shadow Game called the Devil's Board Game. Otogi, who lost, aged 50 years in a single night as a Penalty Game. Since then he desired revenge through his son Ryuji.

On the day of his new store's opening, his son Ryuji informed him that Yugi Mutou, who was Sugoroku's grandson, was an amazing gamer, after he played and lost a game to Yugi. Mr. Otogi was furious about this, but Ryuji assured him he'd beat him at his new game; Dungeon Dice Monsters. Later, after setting up Yugi and framing him for stealing from his shop, Otogi took away Yugi's Millennium Puzzle and locked him up in a secret game room, where Ryuji played against Yugi in a game of Dungeon Dice Monsters for the ownership of the Puzzle. Halfway through, when things were looking bad for Ryuji, Otogi entered the room, and, using his hatred for Sugoroku as fuel for his strength, he managed to break the Puzzle to pieces, all the while ignoring Yugi's pleas.

After Yugi, with some help from Dark Bakura, defeated Ryuji, Ryuji admitted that he could not hate Yugi. Otogi showed remorse, and offered to put the Puzzle's necklace chain around Yugi. However, this was all an act as Otogi immediately tightened the chain around Yugi's neck, threatening to break Yugi's neck unless he complied. Despite Ryuji's protests, Otogi showed immense hatred, and claimed that as Ryuji failed, he is no longer allowed to live. Ignoring his son's further protests, Otogi dragged Yugi into another secret room, and locked the door.

In the secret room, Otogi pinned the Puzzle's chain down to a table, and tried to force Yugi to play the Devil's Board Game in an attempt make Yugi age rapidly, like he did. However, when Otogi tried to rebuild the puzzle for himself, he almost got trapped in an illusory maze, and knocked back a candle, setting his shop on fire. He barely escaped, thanks to Yugi and his friends' help. 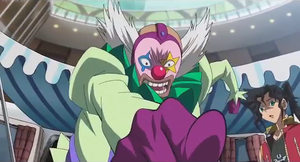 He opened Otogi's cafe, with his son and Jonouchi as servers. He later fired Jonouchi.