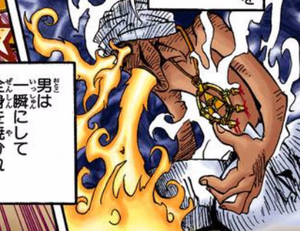 After taking the Millennium Ring, the thief was chased down the street by a group of men who worked for Shadi Shin. Maximillion J. Pegasus saw the thief being captured and feared what the men were going to do to him, so he offered to buy the Ring with all the money he had with him. However, Shadi explained that the act of theft was the pressing matter, not the value of the Ring, which was priceless anyway.[1]

The man was taken to an underground temple and put on his knees before Shadi. He pleaded for his life and apologized for stealing the Ring. Shadi informed him that he was not going to condemn him for the theft, but rather test him to see if he is a chosen bearer of the Ring. The Ring was placed on the man, but its prongs jabbed into his torso, cutting him deeply. Fire then burst out of his eyes and mouth, killing him instantly.[1]