Cyndia (シンディア Shindia) is a character in the Yu-Gi-Oh! manga. This is the original depiction of Cyndia, known as Cecelia Pegasus in the English anime.

Cyndia was the love interest of Maximillion J. Pegasus. The two met as children and fell in love. Her sudden death caused Pegasus to fall into a state of depression and his desire to be reunited with her led to his corruption by the Millennium Eye.

Around the age of 10, while attending a social function, Cyndia met Pegasus, the son of one of her parents' friends. The two fell in love and spent a lot of time together. They would often talk about their dreams and swore to spend their lives together.[1]

Shortly after Pegasus turned 17, Cyndia got sick and died also at the age of 17, causing Pegasus to fall into a state of depression.[1] 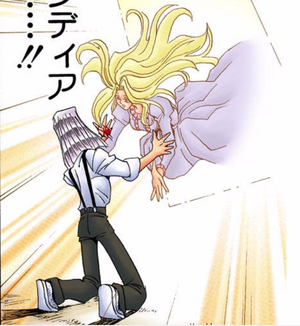 The apparition of Cyndia, created by the Millennium Eye

Unable to overcome Cyndia's death, Pegasus became interested in the ancient Egyptian beliefs in life after death and traveled to Egypt to learn more. In Egypt Pegasus was tested for worthiness of the Millennium Eye. Pegasus passed the test, during which he was embraced by an apparition of Cyndia.[1]

At some point, Pegasus painted a portrait of Cyndia, which he hung in his castle, but did not like to talk about it.[2]

Pegasus grew fond of the Solid Vision technology KaibaCorp was developing to make realistic renderings of Duel Monsters cards. He planned on taking over KaibaCorp, so he could use this technology to create a lifelike projection of Cyndia. He designed a card, depicting Cyndia for this purpose.[3]

After Pegasus' murder, Yako Tenma found the "Cyndia" card, with Pegasus' blood splattered on it.[4]