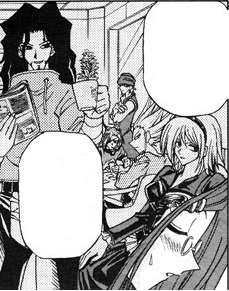 A few of the Card Professors that appear in the manga.

The Card Professors Guild is a mercenary group of Duelists who debut in Yu-Gi-Oh! R, they are hired specifically by Yako Tenma to stop Yugi Mutou's ascent to the top floor of KaibaCorp. Although it is not specifically stated if the groups are one and the same, the term "Card Professor" was originally used by Seto Kaiba in the manga to describe famous Duelists who competed for large prizes specifically in the United States[1]. The most well-known of these fanatical collectors was Keith Howard, known as "Bandit Keith" because of his reputation for claiming prizes in tournaments. It is unknown whether of not all of the known "Card Professors" are a member of this group, but the events in the manga make it clear that Keith was not a member of the guild prior to his resurrection. The organization spends the duration of the story serving under Yako, who had hired them to prevent Yugi and his friends. Thirteen of them appear, but it is not explicitly stated if there are more members of the guild.

Although they work for a designated employer, it is not clearly defined who the leader of the Card Professors is, but the strongest Duelist amongst them has the privilege of using the Black Duel Disk. This special Duel Disk has anti-cheating detection software built-in to the hardware that will set off an alarm if the user attempts to break the rules while using it. This specialized piece of equipment was initially used by Richie Merced, but he was defeated by Keith Howard and forced to surrender the Duel Disk to him. During the rematch duel with Katsuya Jonouchi, Keith lost a second time and gave it to him. At the end of the manga, Jonouchi passes it down to Tilla Mook in repayment for her having previously lent Joey her Duel Disk.

Despite no clear leader being present in the group, not all of the Card Professors have equal standing in the group. For example, Reiko Kitamori, despite her excellent Dueling prowess and amazing strategies (even better, considering she'd only been playing Duel Monsters for roughly a month), was used as little more than a last-resort disposable pawn to stall for time.