Curator Kanekura ( Kanekura Kanchō) is a character in the Yu-Gi-Oh! manga. Kanekura is the curator of Domino City Museum. He exhibited the Millennium Puzzle there after Yugi Mutou lent it to him for one day.

Kanekura is a greedy individual who cares much about money and his own life, but little for anything else, and was willing to lie to others to get what he wanted.

Kanekura and Yoshimori, at the excavation

Kanekura sponsored an excavation in the Valley of the Kings of a Pharaoh's tomb from the New Kingdom era. Two months later the findings were put on display at Domino City Museum in the Egypt Unearthed exhibition.

Kanekura heard from Professor Yoshimori that Yugi Mutou had solved the Millennium Puzzle. He then made plans to steal the puzzle, sell it and give Yugi a portion of the profit in order to keep him quiet.

On the day of the Egypt Unearthed exhibition, Kanekura begged Yugi to allow him to put the Millennium Puzzle on display. Yugi was a bit reluctant, but allowed him to borrow it for one day. The puzzle was put on display and Kanekura showed it to a potential buyer, who was impressed and said he was willing to pay any price. Kanekura spotted Yugi coming over to look at the puzzle, so he silenced the buyer, telling him to meet him in his office ten minutes before the museum closed to finalize the deal. 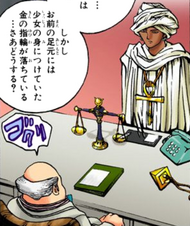 While Kanekura was waiting for the buyer, he was instead visited by Shadi, who claimed to be a servant of Anubis who had come to put Kanekura on trial for defiling the tomb in the Valley of the Kings. Shadi proceeded to perform the Weighing of the Heart on Kanekura. He asked Kanekura a series of questions and used the Millennium Scales and Feather of Ma'at to measure his truthfulness. Shadi warned Kanekura that he would suffer a Penalty Game if the side of the scales weighing Kanekura's lies hit the table. Kanekura's claim that he would save a girl over stealing her golden ring was interpreted as a lie. Before his final question, he asked what a Penalty Game was, so Shadi used an illusion to transform Kanekura's chair into Ammit and said that this creature would be set free in his soul room. Kanekura begged Shadi to stop and said that he would pay anything that Shadi wanted. The side of lies then hit the table. 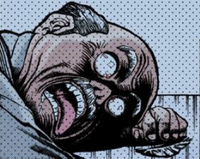 Kanekura's soul was consumed by Ammit. As Ammit was a mere illusion, Kanekura's physical body was not harmed, and to others, he looked as though he had simply died of a heart attack from extreme fright. Shadi claimed that Kanekura's soul room stank of greed and money, which is where monsters like Ammit are born and enjoy making their nests, and that Kanekura will be eaten by those monsters born of his negative traits.