Galestgoras (ガレストゴラス Garesutogorasu) was a demon ka in the Shrine of Wedju in the Yu-Gi-Oh! manga. It was used by Seto in the palace Diaha against Bakura, King of Thieves. 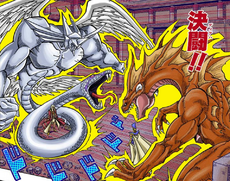 Galestgoras was a demon ka, hosted by a criminal. The High Priests had the ka extracted from the criminal and sealed in a stone slab, placed in the Shrine of Wedju.[1]

During the palace Diaha against Bakura, Seto disregarded Akhenaden's suggestion that the High Priests would need to combine their power to defeat Diabound, believing his power alone would to be sufficient. Seto raised a stone slab, which he used to summon Galestgoras from the Shrine of Wedju.[1]

Galestgoras bit Diabound in the arm, managed to subdue the attack from its snake appendage and slam Diabound on the ground. As Galestgoras attempted to deliver its finishing blow, Diabound evaded by using its power to move freely through solid matter. Diabound then made its way into the tablet Galestgoras was summoned from and destroyed it, causing Galestgoras to disappear.[1]