Diva (ディーヴァ, Dīva) is the main antagonist in Yu-Gi-Oh! The Dark Side of Dimensions. He is described as a mysterious youth who holds the keys to the movie's story. Formerly a disciple of Shadi Shin and the holder of the Quantum Cube, he seeks justice for the death of his master and enters Domino High School under the name Aigami (, Aigami) to spy on his master's killer. 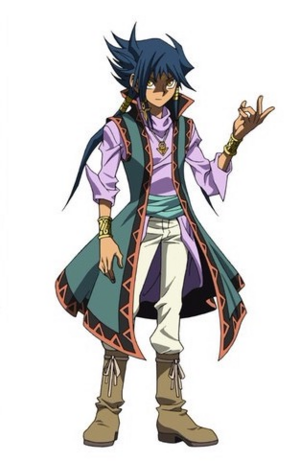 Diva has tanned skin, golden eyes and dark teal hair that spikes outwards in the back, features two small spikes pointing upwards (in a manner similar to horns) and four ponytails (two short ones framing his face and two long ones in the back) bound with golden rings. Diva wears a sleeveless green trench coat that features a high collar and a black border outlined in orange that is patterned with black triangles that are also outlined in orange, a lavender long-sleeved shirt that reaches past his waist with the cuffs rolled back to form spikes at his elbows, a light green sash around his waist, tan pants, and simple brown boots tied at the cuff with tan laces. Diva also wears a large golden ankh-shaped adornment that is clipped onto the golden rings of his right bang, twin golden bracelets with curved designs engraved on them, and a pendant that resembles a miniature simplified Millennium Puzzle. While in disguise as "Aigami", he wears the closed-coat variant of the Domino High School male uniform, and lacks his golden jewelry while doing so while wearing both his uniform and his normal clothes.

Aigami, his sister, Sera, Mani, and other orphans once lived with a slave merchant. They got to sleep in his house, but would have to beg on the streets for money, which the merchant would keep for himself. If he was not satisfied with the amount they brought back, he would scold and refuse to feed them.[4]

After Diva and Sera returned an unsatisfactory amount of money, they were scolded by the slave merchant and apologized to the other children for costing them a meal. Mani insisted it was not their fault and that no matter how much they brought back the slave merchant would say it was not enough. He offered them a pillow, saying hugging it almost feels like having a big meal. After hearing the group laughing, the merchant entered the room and angrily grabbed Diva, demanding to know what was funny.[4]

Diva and his friends, under Shadi's care

Diva and the other orphans then began to live in Egypt. Shadi played a mentor-like role in their lives and taught them about the Millennium Items. In the Shrine of the Underworld, he informed them that three of the items were weak to evil, three represented justice and the seventh, the Millennium Puzzle, contained both justice and evil. He considered Diva to be of the same level as the person destined to solve the Millennium Puzzle. Shadi told them that when the seven items are gathered, the door to a better world would be opened and that the three of them could enter this world, because they had been chosen.[4]

Bakura's father entered the shrine, while Shadi was teaching Diva, Sera and Mani about the Items. He offered to buy the Millennium Ring, but Shadi instead got the ring to test him. The event led to Bakura's son, Ryo Bakura, coming into contact with the ring, awaking Dark Bakura, who attacked Shadi. Diva, Sera and Mani rushed to Shadi, who handed him the Quantum Cube, before he died.[4] 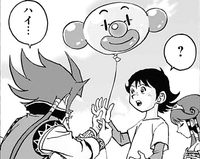 Following Seto Kaiba overcoming Sera's obstacle in an attempted ascension to the netherworld, Aigami approached Sera. He remarked that Sera had been very close and that Kaiba was not somebody they could easily eliminate. While speaking to her, he retrieved a balloon Tomo had let float away and returned it to him.[5]

Diva altered the memories of people of Domino City, implanting the notion that he had been a new student at Domino High School under the name "Aigami". When Yugi Mutou, Anzu Mazaki, Katsuya Jonouchi, Anzu Mazaki and Ryo Bakura saw him at school, they were convinced that they knew him from before, but struggled to remember his name, before Honda finally said it was Aigami.[4]

Scud and his gang approached Aigami under a bridge. Scud approached him with a camera, while making provocative remarks about his cute face. (In the English dub, Scud said that Aigami was to star in his new documentary on bullying.) Aigami made pleas for the stop, which proved fruitless. Katsuya Jonouchi then jumped down from the bridge and intervened. Scud decided to drop the matter for the time being, but instructed Aigami to meet the gang at the the abandoned factory in District 3 at midnight. Jonouchi, Anzu and Yugi asked if Aigami was okay and Jonouchi offered to help, if Scud's gang were still giving him trouble. Aigami thanked them and insisted he was okay. After Aigami left, Jonouchi was puzzled by how he had no recollection of when Aigami joined their class.[4]

Per Scud's orders, Aigami met the gang at midnight. The gang brought lights and weapons. Scud continued to film, saying he would make Aigami world famous and that the theme of this video would be pain. (In the dub, he said that this is the part where Aigami cries and not due to an onion.) The gang were surprised to see Aigami laughing too. Aigami asked if he resided in their memories and who they thought was allowing scum like them to exist. (In the dub, he said it was time for them to vanish and that he had the power to change their world into some place grand, where they do not deserve to exist.) He produced the Quantum Cube and the bulbs in the lights the gang brought all blew. Numerous children of the Prana appeared in spirit form and surrounded the game. Aigami used the cube to make Scud's body disappear. (In the dub, one of the gangsters said that Scud was history, but Aigami disagreed, commenting that history is remembered.) He then made the other members of the gang disappear too. Before leaving, he picked up their camcorder.[4]

Aigami teleported to a mall, where he watched over Yugi and his friends. He was interrupted by Mani, who informed him that Seto Kaiba had found the Millennium Puzzle.[4]

Aigami teleported to the Mortuary Temple, where Kaiba was excavating the Millennium Puzzle. Kaiba was aware Aigami was present in the crowd and that he was after the Millennium Puzzle. Kaiba called Aigami out by his real name and a KaibaCorp employee threatened him with a gun. An act, which Diva mocked, before using the Quantum Cube to make the gunman disappear. He unsuccessfully attempted to use the cube on Kaiba, who accused him of trying his own power against him. The two faced each other in a Duel instead.[4]

Diva seemed to take the advantage in the Duel. However Kaiba pulled the card, "Obelisk the Tormentor", straight out of the ground and Summoned it. Diva thought that this was impossible, since "Obelisk" was the pharaoh's card. Kaiba then used the effect of "Obelisk" and defeated Aigami.[4]

Once the KaibaCorp computer finished scanning the Millennium Puzzle pieces, Mokuba mounted the glass case containing the pieces onto a helicopter and taunted Diva. Diva teleported himself onto the case and stuck his hand through the glass. Mokuba saw what he was doing and headbutted him away, but Diva managed to secretly take two pieces of the puzzle.[4]

While observing Yugi, who was rehearsing his graduation speech, Aigami was approached by Sera, who asked if he had faced Kaiba. He handed her one of the Puzzle pieces and instructed her to keep it safe. He also commented on the revival of the Pharaoh, which Sera was less enthusiastic about.[4]

Aigami later spoke with Yugi, Jonouchi, Anzu, Honda and Bakura, claiming to be interested in getting to know them better. So the group went bowling and ate at a fast food restaurant. They discussed Duel Monsters and told Aigami about some of their adventures.[4]

Aigami pressures Bakura to talk about his time in Egypt.

Later, Jonouchi and Bakura headed to Kame Game to play Duel Monsters with Yugi. On the way, he showed them the Quantum Cube, but claimed it was just a Deck case. After Bakura brought up the topic of the Millennium Ring, Diva used the Cube to transport the three of them somewhere else.[4]

When Jonouchi asked what was going on, Diva used the Cube to send Jonouchi to another dimension, which was slowly dissolving into oblivion. Diva appeared in the sky in that dimension and taunted Jonouchi, saying he was worthless and could not escape.[4]

Diva approached Bakura and asked if he did not remember their earlier meeting and showed him a vision of the event, where Dark Bakura killed Shadi. Bakura was shocked and wept. He pleaded that it was the Ring's doing and apologized for taking away Diva's someone special. They were interrupted by Mani, who had became corrupted by the evil of the Millennium Ring and attempted to kill Bakura. However Mani regained control of himself, threw Bakura aside and told Diva to run. Bakura was sent to one dimension. Diva and Mani, were sent to another, where Mani died and disappeared. Diva considered picking up the Millennium Ring, but stopped when he heard Yugi calling for Jonouchi.[4]

At the Domino City Plaza Aigami confronted Yugi, Honda, and Anzu, and he revealed his real name and identity as one of the Plana , and that the "Aigami" Yugi knew was merely an illusion, implanted in his memory. Jonouchi suddenly returned, having somehow escaped from the other dimension, and Diva and the Plana fled, shocked at the idea that someone could escape their power.[4]

Diva is abducted and blindfolded by a group of men from KaibaCorp. He is brought before Kaiba, who demands the pieces of the puzzle. After refusing to hand them over, he is taken to Kaiba Land.[4]

Diva wakes up tied to a chair in a glass prison, with Mokuba on the other side of the glass. Kaiba monitors their interaction externally. Mokuba taunts Diva, who affirms that Kaiba will never get both pieces. However Mokuba claims to already know where the other piece is.[4]

Yugi and Diva begin to Duel. After reducing Yugi to just a few Life Points, Diva claims he is not doing anything wrong; he just wishes to go the new dimension and leave the current corrupt world behind to create a new world. He invites Yugi to join him, but Yugi refuses to give up on the current world and its future. Yugi turns the Duel in his favor and defeats Diva, reiterating that he believes in the future. Diva disappears after the Duel, returning Bakura to the normal world.[4]

Diva, distorted by the Millennium Ring

Diva then appears in the same dimension Mani died in, and finds the Millennium Ring there. Without touching it, he gets engulfed in its evil. Diva becomes Dark Diva, with the ring fused with his chest. Dark Diva then returns, and Duels Yugi and Kaiba. Atem then comes back from the afterlife and defeats Dark Diva, reverting his body back to his previous state.

He and Sera then part ways with Mani (who was revived) on good terms.[4]

Diva uses a "Cubic" Deck, which is largely focused on continuously Summoning and "leveling up" his "Cubic" monsters from their base form, "Vijam the Cubic Seed", and using their effects to overpower his opponent within the space of a single turn.