Isono ( Isono), known as Roland in the English dub of Yu-Gi-Oh! The Dark Side of Dimensions is a character in the Yu-Gi-Oh! manga. This is the original depiction of Isono, known as Roland in most English media. He is an employee of KaibaCorp, who served as an official in the Battle City tournament.

At Domino Stadium, Isono welcomed people who qualified for the Battle City finals and issued them their I.D. cards, including Marik Ishtar, under the alias "Namu", Rishid, under the guise of Marik, Seto Kaiba, Katsuya Jonouchi, Yugi Mutou, Mai Kujaku and Ryo Bakura.[2] With the cut off time for the finalists arrivals approaching, he proceeded to disclose the true location of the finals, the Battle Ship blimp. He attempted to stop Yugi and Jonouchi's companions from boarding, since they did not have I.D. cards, but Mokuba Kaiba overruled him, while pointing out that Mokuba, himself also did have an I.D. card. With cut off time almost reached, he was about the board the blimp himself and continue the tournament, assuming the eight finalist was not going to show up. However Ishizu Ishtar arrived just in time and he accepted her as the last finalist.[3]

One hour after the finalists were shown their rooms on the blimp, Isono instructed them to gather in the central assembly hall, where he unveiled the Ultimate Bingo Machine, which was to determine the match-ups for the quarterfinals. Using it he announced Bakura and Yugi as the first pairing.[4] Isono served as referee during the Duel[5] and when Dark Yugi was reluctant to attack the injured Bakura, reminded him of the five-minute time limit Duelists had each turn.[6] After announcing Yugi as the winner, he had the first-aid kit brought out for Bakura, following Mokuba's instructions. He reminded Yugi that he was permitted to take one of Bakura's cards, per the ante rule, but Yugi was more concerned about Bakura's safety.[7]

Isono announced the bingo draw for the second quarterfinal, matching Jonouchi and Rishid, still posing as Marik.[7] As the participants shuffled each others Decks, he was flustered by Jonouchi's intimidating stare-down at Rishid and instructed him to back down and return to his Dueling position.[8] When Jonouchi and Rishid fell unconscious, he refused access to the Dueling platform for Jonouchi's friends, since the Duel was not over. He ruled that the first player to stand up would be the winner, having displayed the greater willingness to continue. He enforced a time limit, after which both would be disqualified,[9] but eventually declared Jonouchi the winner.[10]

Isono announced the final bingo draw, which selected Mai Kujaku and Marik Ishtar, now Dark Marik, for the third quarterfinal.[11] He refused allow the Dueling platform to be lowered, when Mai's life was in danger. But Jonouchi pushed him aside and tried to operate the controls, despite Isono's warning of disqualification. Jonouchi and Dark Yugi both disregarded his orders and climbed into the arena to help Mai.[12] Stunned by the recent events, he forgot to declare Dark Marik the winner, until prompted by Dark Marik, himself.[13] 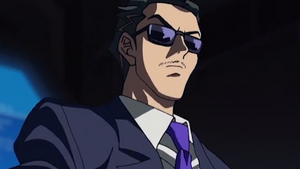 Isono in The Dark Side of Dimensions

Before Kaiba departed to his space station, he instructed Isono to plan a Duel exhibition while he was away, so that he could showcase his new Duel Disk when he returned.[14]