Mr. Karita (刈田先生 Karita-sensei) is a character in the Yu-Gi-Oh! manga. He is a P.E. teacher who harassed Ryo Bakura on his first day at Domino High School.

After suffering a Penalty Game, he became Villager D in a Monster World role-playing game.

In the second Yu-Gi-Oh series these events never happened as seen in a flashback during the Duelist Kingdom arc, in the flashback Bakura was first introduced as a new student in class.

On Ryo Bakura's first day at Domino High School, Karita saw him walking through the hallways with a group of girls. He angrily pulled Bakura aside and recognized him as the new student, who has caused problems in his last school. Insistent on disciplining him, he yelled at Bakura that this school has rules and seized him by the hair, saying boys having long hair is against the rules. He ordered Bakura to have his hair shaved for the next day if he wants to be treated as a student and walked off laughing.[1] 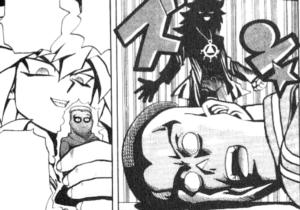 Later that day, Bakura switched to Dark Bakura who went after Karita for revenge. He played a Shadow Game with Karita and trapped his soul in a miniature as a Penalty Game.[1]

Karita was added to a collection of miniatures Dark Bakura had made by trapping the souls of Ryo's gaming friends and forced to play the role of "Villager D" in the role-playing game Monster World.[2] His body was sent to the hospital, where he was said to be in a coma.[1]

Dark Bakura played Monster World with Ryo's friends: Yugi Mutou, Anzu Mazaki, Katsuya Jonouchi and Hiroto Honda, while pretending to be Ryo. He used Karita in the game, placing him inside a tavern.[2] 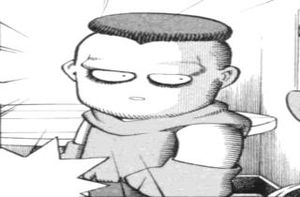 Ryo's friends were instructed to speak to "Villager D" to find directions to Zorc Castle. Jonouchi burst out laughing when they saw how much the miniature resembled Karita. Karita tried pleading with them to save him, explaining that Bakura had trapped him in a miniature. While Ryo's friends tried to figure out if they really heard the miniature talk, Dark Bakura warned Karita not to go out of character again or he would be killed. Karita complied and gave the others the directions to the castle.[2]

A few days after Ryo and his friends defeated Dark Bakura in the game, Karita and the others trapped in miniatures turned back to normal. Despite their help, Karita displayed no recollection of what happened as he threatened the friends with detention, when they were late for school.[2]

Mr. Karita was closing the gates for Domino High School, while Jonouchi and Honda were running late. However the duo made it through the gate on Jonouchi's bike, with seconds to spare, leaving Karita yelling after them.[3]

During the graduation rehearsal, he waved a shinai at Jonouchi, while telling him off for falling asleep.[3]