Ventriloquist of the Dead

The Ventriloquist of the Dead, known as Puppeteer of Doom in Yu-Gi-Oh! Reshef of Destruction and The Puppeteer in the Dungeon Dice Monsters video game, is a Player Killer, who Duels Dark Yugi using a puppet of Seto Kaiba. In the anime, he is replaced with Ghost Kaiba.

Yugi challenged Saruwatari to a Duel, during Duelist Kingdom, in order to retrieve the Star Chips confiscated by Saruwatari. Since Saruwatari did not play games himself, he arranged for the ventriloquist to face Yugi instead. 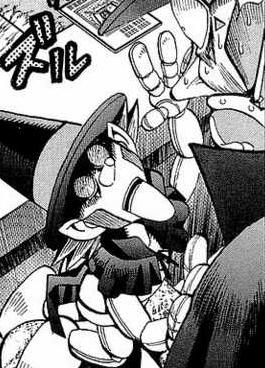 At first, Yugi saw the puppet as an insult and mockery to Kaiba and was infuriated, but when the ventriloquist, using Kaiba's stolen Deck and having the puppet play the cards out, summoned the first of the three "Blue-Eyes White Dragon", and then claiming that the puppet was carrying a part of Kaiba's soul and sought revenge, Yugi began to worry that Kaiba has forsaken the given second chance, and instead sold his own soul for revenge and that the two of them would forever be archenemies. Speaking through the puppet with a stuttering and sadistic tone, its disturbing presence gave the Ventriloquist the upper hand as Yugi's confidence and concentration was weakened.

After losing, Dark Yugi, furious that the ventriloquist stole Kaiba's cards and toyed with his soul with a puppet, inflicted a Penalty Game on him, where he believed a puppet of himself was attacking him.

The Ventriloquist of the Dead used Seto Kaiba's Deck, which had been stolen by KaibaCorp employees working for Industrial Illusions. The Deck also contains one unnamed monster.