Amane Bakura is Ryo Bakura's deceased younger sister. She is mentioned in the Yu-Gi-Oh! manga when Ryo is seen writing a letter to her. 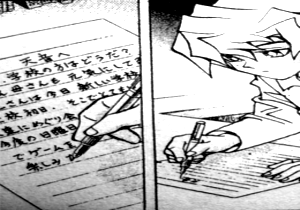 Amane died in a car accident at a young age along with her mother. Her brother, Ryo, wrote letters to her in Heaven.[1] Before his dark other self appeared, Ryo was writing the following to Amane:[2]


How is school? How are you and mother? Your brother started his new school today. I've only been there a little while and on the very first day I made a lot of new friends. They asked if they could come over to my apartment to play some games. I'm really looking forward[2]

He then stopped as he heard Dark Bakura chuckling malevolently.[2]