Gozaburo's right-hand man is a character, who appeared once in the Yu-Gi-Oh! manga.

He was a high ranking individual within KaibaCorp, while Gozaburo Kaiba was in charge. Once Seto Kaiba took over, he lost his position.

In the anime, Leichter played a similar role. 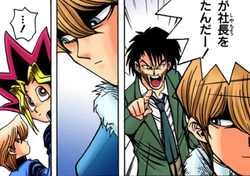 He appeared at the grand opening of the first Kaiba Land, where he accused Kaiba of taking over the company and driving his father to his suicide. He called Kaiba the "devil incarnate". Seto had the security guards remove him. Seto then informed Yugi Mutou of that man's former position and said that he is now a worthless has-been, before giving Yugi a cover story of his father's death.