The ZTV director (ＺＴＶディレクター Zetto Tī Vi direkutā) is a character from the Yu-Gi-Oh! manga.

He works for ZTV and bends the truth in front of cameras in order to improve ratings.[1] 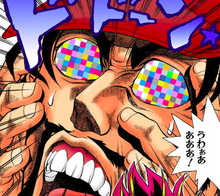 The director staged a bullying documentary, Caught on Camera: School Violence, at Domino High School. He got his assistant Fujita to disguise as a student and play the role of a bully by fighting Yugi Mutou on camera.

However, Jonouchi arrived and broke up the fight. The director intervened and told Fujita he could leave. He explained that Yugi was now the star of the show and will get dozens of letters from people sympathizing with him. Jonouchi tried to attack the director, but hesitated after being reminded he was on camera. The director then asked the camera crew to stop filming, and then attacked Jonouchi.[1]