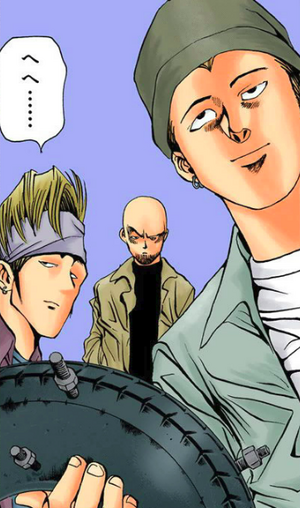 The Muscle Hunters (マッスルハンター Massuru Hantā), known as Venoms in the English Yu-Gi-Oh! Dungeon Dice Monsters video game, are a group of thugs in the Yu-Gi-Oh! manga. They were hired by the Junky Scorpion owner to steal back expensive sports shoes he sells, including Air Muscle.[1]

They are based on the real life phenomenon, "Air Max Hunting", a wave of thefts in Japan, in which Nike Air Max shoes, were stolen.[2]

They once attacked Katsuya Jonouchi, Hiroto Honda and Yugi Mutou from behind and stole Jonouchi's Air Muscle shoes. Jonouchi and Honda tracked them down later at the arcade and beat them while fighting face to face. The Muscle Hunters then revealed that they'd been paid by the store owner.[1]