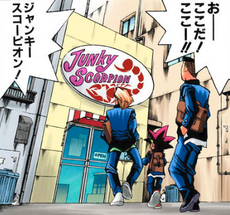 Junky Scorpion is a shoe shop in Domino City in the Yu-Gi-Oh! manga.

Even though the store is located in an impoverished neighborhood, the shop sells rare and limited sneakers that can carry a high price tag. The owner is a crooked salesman, who would sell rare shoes to customers only if they can prove their worth. After selling expensive shoes, the owner would pay people, whom he calls Muscle Hunters, to steal them back, so he could sell them again.[1]

Jonouchi went to the shop, with Yugi and Honda to buy a pair of top of the line sneakers, known as Air Muscle. The owner was unwilling to sell the shoes to Jonouchi, unless he could prove he was worthy. He set up a test for Jonouchi, where he was to put his foot in the shoe, while he said there was a scorpion inside. Jonouchi plucked up the courage and did it. The owner then revealed that he didn't really put the scorpion inside.[1]

A hired gang attacked Jonouchi, Yugi and Honda from behind and stole the shoes. The boys later met the gang and beat them into telling them the owner had paid them to do it.[1]

Dark Yugi met up with the owner and played a game, where they must pull coins out of one of the shoes, while the scorpion was inside. The owner got greedy and tried to kill the scorpion. He failed to do so and got his hand stuck as he tried to grab all the coins at once, allowing to scorpion to badly sting him.[1]