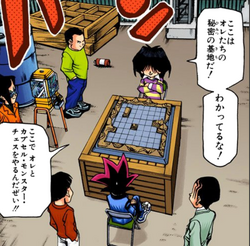 Mokuka faces Yugi in the hideout.

Mokuba's gang's hideout was an abandoned warehouse, in the Yu-Gi-Oh! manga, in which Mokuba Kaiba and his gang would hang out in.

Mokuba's gang met Yugi Mutou outside Old Man Dentures' candy store. By threatening him with weapons, they forced Yugi to come to their hideout. They brought the Capsule Monster Chess dispenser from outside the store with them, with Mokuba paying off Old Man Dentures as they did so.

At the hideout, Mokuba's followers provoked Yugi, causing him to change to Dark Yugi. Mokuba had hoped for this as he wanted to face Dark Yugi to get revenge for him inflicting a Penalty Game on Seto Kaiba. He challenged Dark Yugi to a game of Capsule Monster Chess with the condition that if Mokuba won, he could cut off one of Yugi's fingers. Dark Yugi accepted under the condition that Mokuba would receive a Penalty Game if Dark Yugi won. Using the dispenser, which had previously been tampered with, Mokuba and Dark Yugi took turns getting monsters to use from it. The rigged dispenser gave Mokuba high Level monsters and Dark Yugi low Level ones. However Dark Yugi was still able to win the game and leave the hideout safely.