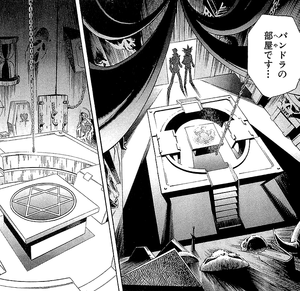 Arkana's room, known as Pandora's room in the manga and Japanese version, is a location in the Yu-Gi-Oh! manga and anime, set up by Arkana to Duel against Yami Yugi.

The room is in the basement of the RPG Hobby Trading Cards shop. It is filled with tools used by magicians and occult paraphernalia.[1]

The center of the room contains a stage, used by people playing Duel Monsters. The stage is equipped with two buzzsaws, whose position changes depending on each player's Life Points. Players would have their feel locked to the stage, such that the loser of the Duel would have their feet cut off. The winner would receive a key to free themself.[1]

Dark Yugi went to the card shop, after discovering that it was a front for Rare Hunters. There he was greeted by Pandora, who led him to the secret room. The buzzsaws were initially hidden from view and Dark Yugi faced Pandora on the stage. Pandora then pulled a chain, causing their feet to be shackled and the buzzsaws to be revealed.[1]

Although Pandora lost the Duel, he attempted to use a key he had hidden on his person to free himself before he could be dismembered. Marik Ishtar insisted Pandora pay the price for his defeat and used the powers of the Millennium Rod to remove any perception of the key from Pandora's mind. However Yugi Mutou saved Pandora, after unlocking his own feet.[2]

In Yu-Gi-Oh! The Sacred Cards, Pandora's room is referred to as the basement Duel chamber. It is downstairs in the card shop. Initially the player cannot access it, as they are blocked by the manager's assistant. 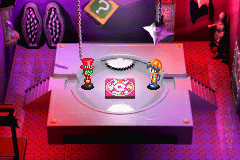