"The Fatal Duel!" known as "Very Confined Duel!!" in Japanese, is the 161st chapter of the Yu-Gi-Oh! manga. In its first English printing, it was numbered as the 102nd chapter of Yu-Gi-Oh! Duelist. In the 3-in-1 edition, its number was changed to match the original Japanese printing.

Dark Yugi faces a Rare Hunter who use the Dark Magician, Pandora the Conjurer. 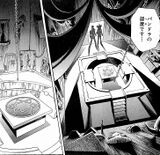 Pandora tells Dark Yugi that there is only one room for one magic-themed duelist in this world, and tells him that the winner of the Duel will earn the title of "Master of Magicians!" and reminds him not to run from the Duel. Dark Yugi accepts the challenge. Pandora tells Dark Yugi that the room is too small to fight, saying that he has prepared a Duel Arena in the basement of the shop. He explains that Marik Ishtar told him that Yugi might be dropping by, telling him that he had to set something special so Yugi would not get bored. Dark Yugi is shocked to hear about Marik, the leader of the Ghouls and the the owner of the last Millennium Item. Dark Yugi tells Pandora to tell him where Marik is, Pandora replies that he is close, he could say that Marik's right in his head. Dark Yugi thinks that he's right since Marik has the power to possess his underlings and make them do whatever he wants. Wondering if Marik could be watching right now, they both enter a door to the Duel Arena. 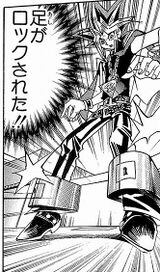 Yugi notes that the room contains all kinds of magic tools and occult paraphernalia, commenting that it looks like a bad dream. Pandora says that a conjurer has many powers from simple card tricks to the ability to bring nightmares to life. Both Duelists put their Decks on the table, and each Duelist starts to shuffle his Deck. Pandora says whether they can draw their Magicians or die horribly all depends on this moment. Dark Yugi tells Pandora that shotgun shuffling will damage his cards, though Pandora claims that he's used to shuffling in this manner. Dark Yugi decides to cut Pandora's Deck, and Pandora reminds Yugi that there's an old saying among gamblers: "Trust your friends, but always cut the cards." Dark Yugi tells him that he doesn't make friends with Ghouls. Pandora then tells Yugi that he will show him something special that will prove that they're truly blood brothers, he pulls a chain, then shackles emerge from the walls and capture both players' legs. Pandora tells Yugi that neither of them can escape, and informs him that he will witness the greatest show of the century: Pandora's daring escape from the very jaws of death.

Pandora explains that this is a 100-tooth carbide-tipped saw blade just like the one used to saw a woman in half in magic shows, saying that this Duel will use his house rules. Pandora continues to explain that the numbers marked on the cutter's rails are the player's Life Points, and that as the player's Life Points reach zero the blades get closer and closer until... chop. Pandora says that this is a "Nightmare Game" where the loser's body will be sawed apart. He then says that the box under the chair contains a key that will unlock the shackles on their legs, and the display on the box shows the enemy's Life Points. As it's designed to open when it reaches zero, in other words, only the winner can escape. Dark Yugi tells Pandora that he's crazy, but Pandora says that according to Greek mythology, Pandora's Box was created by the Gods to contain all the misfortune in the world, but when a woman named Pandora opened it, all the evil escaped, bringing evil, suffering and pain but one thing remained in the box: hope. Pandora claims that the key is their hope, but only for one of them. Furiously, Dark Yugi asks Pandora if a battle that kills people is fun, and Pandora replies that it is, because he's the one who will win. Yugi angrily tells Pandora that he's scum and vows that he will take him to the very edge of his life. 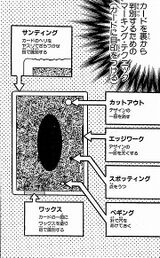 The Duel begins, and Dark Yugi goes first. Pandora thinks that luck is on his side as he already drew the "Dark Magician." Of course it wasn't just luck, as a professional stage magician, he knows more than 1000 techniques to cheat at cards. On this occasion, Pandora has used the "Stripper technique". He had shaved off the edges of the card to make it just slightly smaller than the others: naturally, all three of his "Dark Magician" cards had been treated this way and when Yugi cut the deck before the Duel, the "Dark Magician" would be on the top. Dark Yugi starts his turn, he plays a face-down card and Summons "Alpha the Magnet Warrior" in Defense Mode. On his turn, Pandora Summons "Legion the Fiend Jester" in Defense Mode. Pandora thinks that according to the Super Expert Rules he just needs to play one more monster and then he can sacrifice them to summon "Dark Magician". 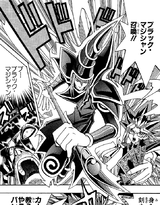 Turn 3: Dark Yugi
Dark Yugi activates "Card Destruction," discarding all cards in both players hands and forcing both players to draw the same number of cards that they discarded. He activates his Set "Brain Control" to take control of "Legion the Fiend Jester." Dark Yugi then sacrifices his two monsters to Normal Summon "Dark Magician" in Attack Mode.

Episode 60 of the anime, "The Master of Magicians, Part 1" is based on this chapter.